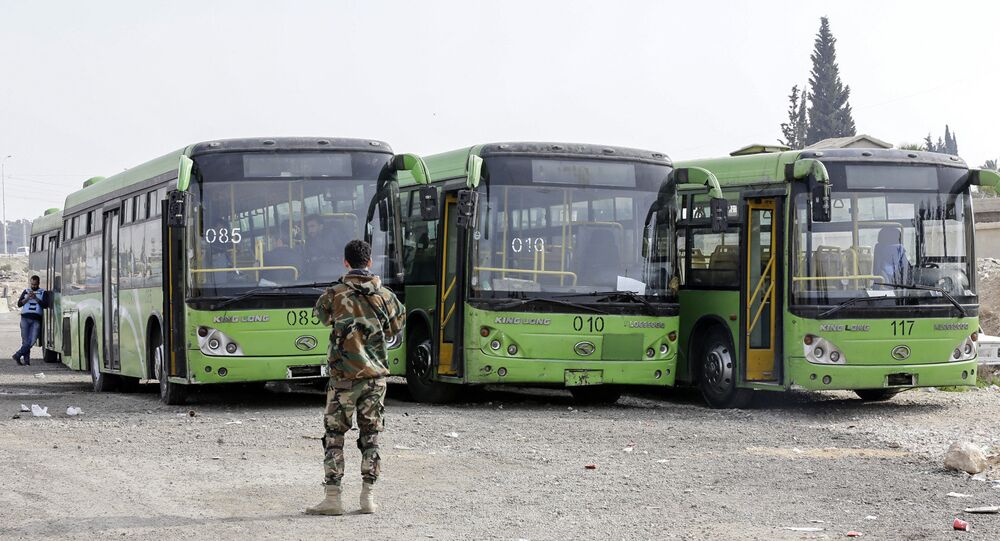 "Most of the militants have been evacuated by now, the restoration of peaceful life is underway. About 90 percent of Eastern Ghouta is already under control of government forces," Lavrov said after a meeting with UN Special Envoy for Syria Staffan de Mistura in Moscow.

"We are receiving information from residents on a daily basis. Four days ago we got information about preparations for provocations involving "Shaheed belts" and suicide bombers who were to be seated along with refugees. Unfortunately, this information has been confirmed," Sergei Shoigu said on Thursday after a meeting with UN Special Envoy for Syria Staffan de Mistura.

According to Shoigu, Russian servicemen seized seven belts on Monday, 32 belts on Tuesday and nine belts on Wednesday.

"It's easy to imagine what would happen if those suicide bombers blew themselves up on buses with refugees, including women and children. It doesn't matter whether those are families of militants or not."

"This is a great job that our officers do," he pointed out, adding that Russian troops are providing the refugees with medicine, food, and water as well as lodging for the night.

He also stressed that militant snipers had injured six civilians, adding that the "sniper threat" has been neutralized.

© AFP 2020 / AHMAD AL-RUBAYE
Moscow: US Deploying Hardware to Al-Tanf, Boosting Military Presence in Syria
Russia has been facilitating the evacuation of civilians by establishing checkpoints and announced a daily five-hour humanitarian break in the fighting to stop casualties among the population in Eastern Ghouta. This became possible after the adoption of UNSC Resolution 2401 on Syria.

Resolution 2401 urges all parties to the conflict to immediately stop hostilities and adhere to a long-term humanitarian ceasefire for at least 30 days across the entirety of Syrian territory in order to ensure the safe and unhindered delivery of humanitarian aid supplies, as well as the medical evacuation of injured people. Despite the adopted document, clashes in the area have continued.