GENEVA (Sputnik) - The UN Human Rights Council (UNHRC) has adopted a resolution on the human rights situation in Syria without taking notice of Russia's proposals, a Sputnik correspondent reported.

The resolution on the human rights situation in Syria was adopted by 27 votes in favor, four votes against (Burundi, China, Cuba, and Venezuela) and 16 abstentions.

The adopted resolution is almost entirely devoted to the systematic and gross violations of human rights and international humanitarian law by the Syrian authorities and the militias that are fighting alongside the Syrian government, while terrorist attacks, violence, and violations of human rights by such terrorist groups as the Daesh* and Jabhat Fatal al-Sham** are mentioned in just one paragraph.

The resolution also condemns the use of chemical weapons in Syria with an explicit reference to the Syrian authorities, that have refuted on numerous occasions the relevant allegations. 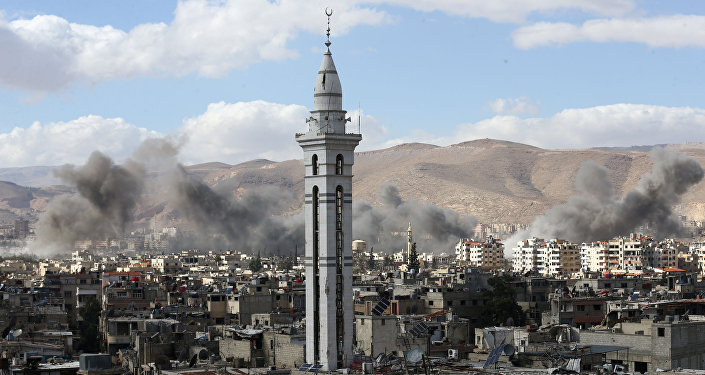 © REUTERS / Bassam Khabieh
UNHRC Resolution on Syria Has Nothing to Do With Human Rights Concerns - Moscow
The Russian delegation proposed a number of amendments to the adopted document. Moscow insisted that the resolution should condemn each and every terrorist attack in Syria, regardless of the perpetrator, in order to point not only at crimes of officially recognized terrorist organizations but also at offenses, committed by illegal armed groups, which, according to Russia, are supported by Western states.

Besides, despite the fact that the resolution praised the success of international conferences on Syria that were held in Brussels, London, and Kuwait, the UNHRC refused to make an amendment that would reflect the outcome of the Syrian National Dialogue in Sochi. The council rejected the second amendment for the reason that the Congress had not dealt with human rights and fell within the competence of the UN Security Council.