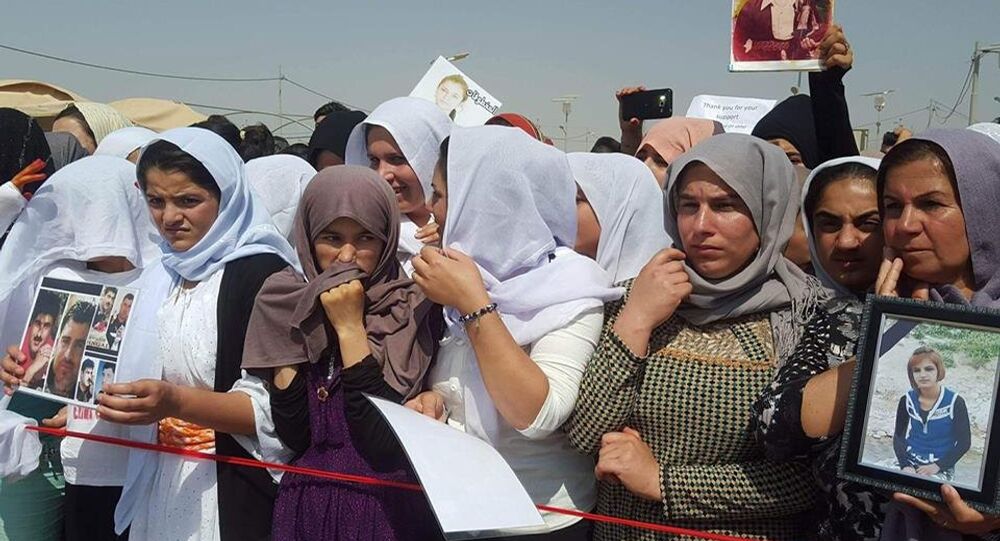 Hina Abbas Khalaf is a 15-year-old Yazidi girl from the outskirts of Syrian Sinjar. During the seizure of this area by Daesh militants, she was captured together with her four sisters. She spent almost 4 years in captivity from August 2014 to February 19, 2018. During this time she was resold three times.

The first was Syrian ash-Shadadi. He brought Hina out of Iraq and traveled with her all over Syria. She was in Raqqa, Deir ez-Zor, Abu Kamal, Mayadin. The militant forced her to read the Koran, to abandon her faith, demanded her to perform Namaaz, beat her for disobedience. He presented the young Yazidi to Abu Ajman.

"I remember him most of all. This rapist was an Iraqi Kurd from the Sulaimaniya Province in Iraqi Kurdistan. Everybody called him Abu Ajma; I don’t know his real name. (…) He beat me and abused me. He could leave me without food for several days. (…) He sold me to a Libyan called Bakr an-Nakhli for 15 thousand dollars. He also sold me, this time for 10 thousand dollars, to a Libyan Daesh member called Zakria. Both men were quite young, twentysomething. They were not married unlike Aby Ajman," she told Sputnik.

Destinies of the Sisters

Sputnik met with the eldest sister, Hanifah Abbas Khalaf, who is now 30. It was she who redeemed all three sisters from Daesh captivity. She alone stayed free because she had managed to escape.

"When we met with Hina, we’d been crying and embracing each other for a long time. She was asking about our family, where everybody is, how they are. I could not tell her about our father, who had died of grief. He was only 50. He had a heart attack when he knew that his youngest 9-year-old daughter, Wadhah, was gang-raped by Daesh terrorists," Hanifah told Sputnik

"My sister Hina had two abortions in Syria because she did not want to have children from terrorists. She was a little girl then, but did it."

© AFP 2021 / AHMAD AL-RUBAYE
Yazidis on Daesh Atrocities: 'Europe, US Did Nothing to Help Us'
The sister added: "Still two of our sisters, 20-year-old Basa and the youngest Wadhah, remain in captivity. I haven’t heard anything about them; I don’t know what is happening to them.  All I know is that they are somewhere in Syria."

The redeemed sisters, 20-year-old Leyla and 10-year-old Zina, are being treated now. The elder sister has health problems due to what she has gone through, she is about to have surgery. Both of them are undergoing a course of psychological recovery in Germany.

Future of the Yazidi Captives

Hanifah saw a lot while searching for her sisters. Surviving captives told her that many Yazidi women were transferred to Turkey. They brainwash them, give them false ideas and prepare them to become suicide bombers for terrorist attacks in Turkey.  “There are a lot of Yazidi women and children in Turkey now. Militants are blackmailing the Turkish government, saying ‘either cooperate with us or we will do something terrible’,” Hanifah said.