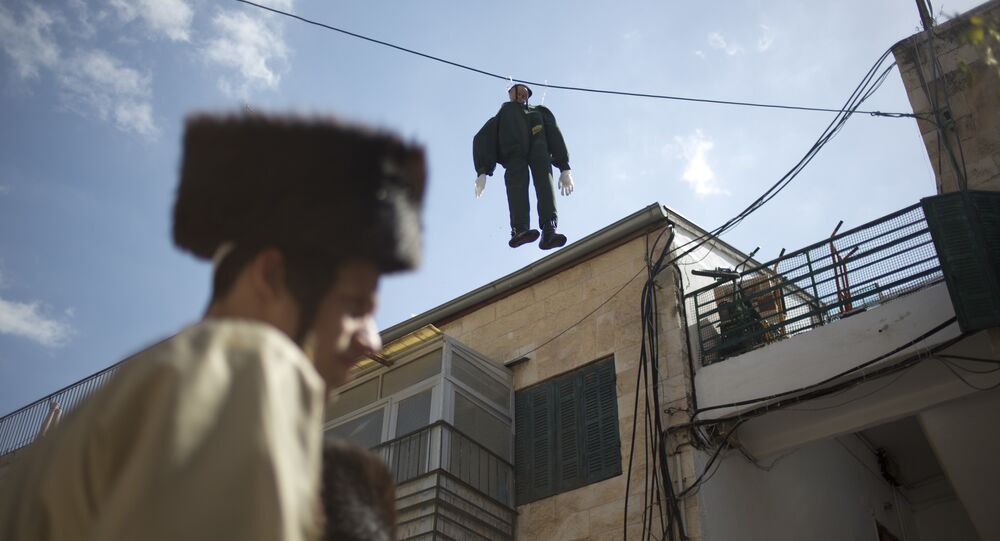 Twitter Enraged Over 'Expel or Kill' Anti-Arab Graffiti in Jerusalem

The message, claiming “Arabs of Jerusalem are terrorists” and calls “to take care of them” appeared on walls and cars in one of the city districts following a deadly attack on an Israeli man.

Police have launched an investigation into a reported hate crime in Jerusalem’s Pisgat Ze’ev district, an area which is considered by the international community to be an illegal Israeli settlement, suspecting a so-called “Price-Tag” attack. The vandals left graffiti in Hebrew, translated as “The Arabs of Jerusalem are terrorists, expel or kill them”; “Let us take care of them”; and “There is no place in the Land of Israel for foreigners and the enemies of God,” as well as slashed car tires. This comes just a day after the Israeli man Adiel Kolman was stabbed to death in the Old City’s Muslim Quarter by a Palestinian resident, according to reports.

On Twitter, some users reacted with sadness, whereas others were infuriated, slamming racism against the Palestinians.

It's sad that such a beautiful script and language is used to write hate.

​House by house, child by child, woman, old man by woman & old man, one by one #Apartheid @Israel practices #ethnic-cleansing & genocide against occupied #Palestine & #Palestinians. The world stands silent idly by. Not a sound, not an objection. Shame on @UN @EUCouncil & others!

"Let us take care of them"..
Is it a new holocaust rhey want?
Towards the Palestinians that is.
Warmongering fools.

Biggest punks in the world…they have a army protecting them…

ZIONISTS ARE NOT HUMAN!
ISRAHELL IS AN APARTHEID REGIME AND TERRORIST ENTITY!

Some, however, suspected that it is actually Arabs themselves who are behind the vandalism.

maybe it's the arab who did it, the handwritting looks to the curves of the arab language

​This is the third such incident over the past 10 days in which somebody has vandalized cars with spray paint, writing “Death to all Arabs” and “Revenge” on them; while in another attack, cars were burnt in an Arab neighborhood, with “Death to Arabs, price tag” written on a nearby wall.

Palestinian President Calls US Ambassador to Israel ‘Son of Dog'