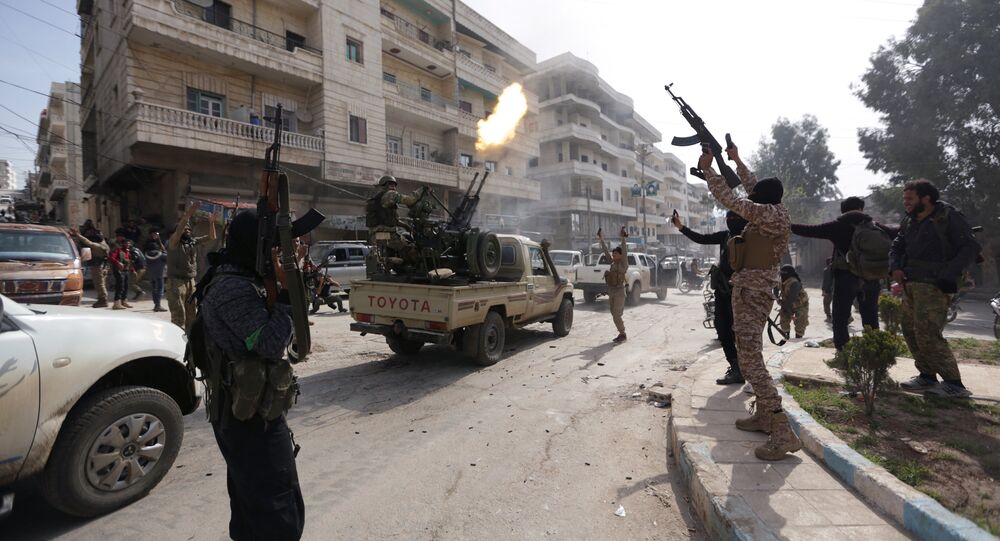 Free Syrian Army troops allied with Turkey overran Syrian Kurds in Afrin on Thursday night as part of a continued Turkish incursion into Syria, where the US’ fight against Daesh now seems like an afterthought.

Turkish President Recep Tayyip Erdogan has stated that the Turkish Army's Operation Olive Branch in Syria aimed at suppressing Syrian Kurdish People's Protection Units, or the YPG, which Erdogan claims are terrorists, but which the US has supported and funded as allies against Daesh.

The US State Department told reporters in a statement Monday that Washington "remains committed to our NATO ally Turkey, to include their legitimate security concerns."

In addition to the forced exodus of YPG and civilians from Afrin, "looting started" shortly after the town was taken over, Kani Xulam, founder of the American-Kurdish Information Network in Washington, told Sputnik Radio's Loud & Clear on Monday.

​"Shops were looted, homes were entered and there are pictures of Free Syrian Army soldiers basically taking whatever they wanted," Xulam said. According to Erdogan, "in the center of Afrin, symbols of trust and stability are waving instead of rags of terrorists."

​"The Kurds have fled south to Aleppo," Xulam said.

​But according to YPG representative Othman Sheikh Issa, speaking in a televised statement Sunday evening, "[Kurdish] forces are present all over Afrin's geography. These forces will strike the positions of the Turkish enemy and its mercenaries at every opportunity."

Instead of confronting enemy forces in direct battle, Kurdish fighters will adopt guerilla tactics to become "a constant nightmare" for the Turks and the Free Syrian Army forces, Issa said.

​In other words, the Kurds will take on the role of an insurgency force. "The Kurds feel angry toward the world, toward the West," Xulam told Loud & Clear.

In addition to looting, videos on social media have shown FSA forces executing Kurds in the street, in broad daylight. As Peter Ford, the former British ambassador to Syria, told Loud and Clear hosts Brian Becker and John Kiriakou, "it's great people are exposed to what America's allies really look like."

"The so-called Free Syrian Army [personnel] are Islamo-fascists by another name," Ford told Loud & Clear, explaining that the militiamen operating alongside Turkish troops are "Jihadi militants indistinguishable from al-Qaeda."

US President Donald Trump ended the CIA's secret program to give weapons and aid to the FSA just last year. For years, the group was included under the banner of the "moderate rebels" opposing Syrian President Bashar al-Assad and won US assistance on the grounds they were not "radical." As recently as January, the FSA was lobbying for the CIA to revive the aid program.

The four-year CIA program ran upward of $1 billion in costs, according to reports.