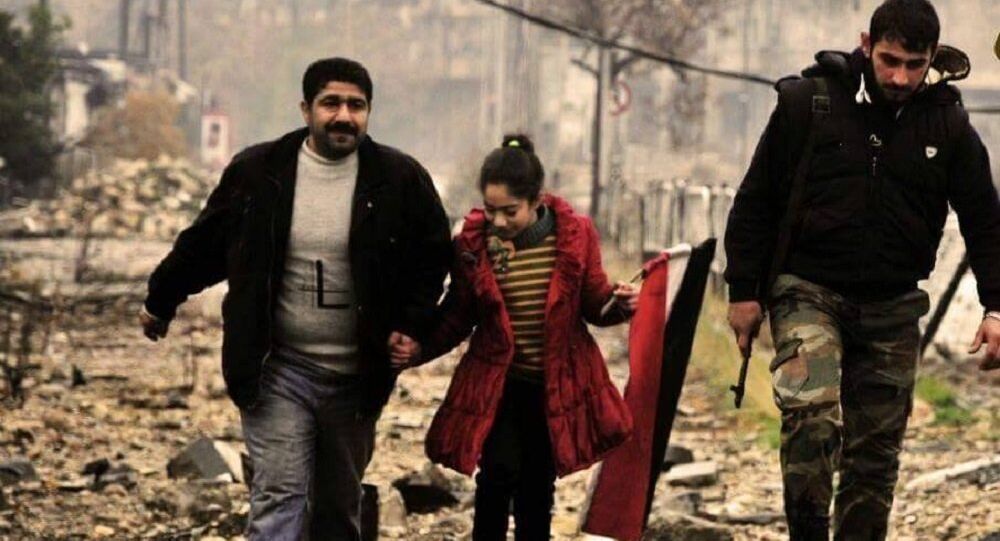 MOSCOW (Sputnik) - Over 800,000 people have returned to the Syrian city of Aleppo and its suburbs, liberated from the Jabhat al Nusra terrorist group (banned in Russia), the Russian Defense Ministry said in a statement on Saturday, and explained how the US is preventing the return of Syrian territories under government control.

"The province of Aleppo illustrates the efficiency of the work of the Russian reconciliation center for Syria. Over 800,000 people have returned to the city of Aleppo and its suburbs, liberated from Jabhat al Nusra and its affiliated groups, since December 2016. The local authorities provide assistance with housing reconstruction. Markets, shops, schools and medical facilities are working. Agriculture is being actively restored," the statement added.

Additionally, Syrians that left Aleppo and moved to the Idlib province together with fleeing militants in December 2016 had been returning to their homes since March 4, according to Russian military data.

"At least 870 families, a total of 3,409 people, have returned to Aleppo from the Idlib province through a humanitarian corridor, organized by the Iran-Russia-Turkey coordination center, in the region Tell-Sultan – Abu Duhur," the ministry said.

"Within the implementation of the UNSC Resolution 2401, Russia performs its obligations in full. The Russian reconciliation center holds active negotiations with the leaders of the Syrian armed opposition on the entire Syrian territory," the statement read.

The statement also specified that the Syrian government forces conduct hostilities against irreconcilable armed groups that harass the local population.

However, a US-formed autonomous government in northern Syria has been preventing civilians from fleeing the war-ravaged city of Raqqa, the Russian Defense Ministry said Saturday.

“Authorities formed in Raqqa by the US military from the so-called Democratic Federation of Northern Syria have confined its residents to the districts gutted by the bombs of the US-led coalition, stopping them from going to safer areas in Syria,” the statement read.

The Russian military added only several districts in downtown Raqqa are fit to live in, while most of the city is filled will unexploded bombs and improvised explosive devices, which have already claimed over 500 lives.

© AFP 2020 / Ammar SULEIMAN
Russia Vows Response in Case its Military in Syria Threatened as US Considers Anti-Damascus Strike - MoD
Moreover, the United States prevents the delivery of any humanitarian convoys to the Syrian city of Raqqa as well as the arrival of the UN mission that would assess the scope of the humanitarian catastrophe in the region, the Russian Defense Ministry said in a statement on Saturday.

"The United Sates continues to hamper the arrival of any humanitarian organizations' representatives in Raqqa, not to mention the coordination of the arrival of the UN assessment mission in the city, which should determine the scope of the humanitarian catastrophe and decide on the volume of the emergency humanitarian assistance to the vulnerable population," the statement said.

According to the statement, only several central districts of the city remain relatively safe, while the rest of the city is dangerous for human habitation.

"Thousands of decomposing bodies of civilians and militants, who died in massive airstrikes on Raqqa, carried out by the US-led coalition, have not been recovered and remain in the rubble. Outbreaks of infectious deceases, which threaten to turn into an epidemic with the arrival of summer, have already been recorded in the city," the statement added.

In addition, the United States and its coalition partners have failed to keep the promises they made when they agreed UN Resolution 2401 to enable humanitarian deliveries in Syria, the Russian Defense Ministry said.

“Despite assurance from the US military that it will let humanitarian aid reach displaced people in At Tanf, representatives of the US military command have blankly refused to guarantee that this aid will be distributed among civilians rather than US-controlled militants,” the statement read.

© AFP 2020 / DELIL SOULEIMAN
US to Stay in Syria After Daesh Defeat to Ensure Terror Group Does Not Reemerge - CENTCOM
US instructors have been training armed Syrian opposition at a base located at the At Tanf garrison in the country's southeast, close to the Rubkan camp for the displaced people.

“That means that the United States, the United Kingdom and coalition countries, which have actively promoted the adoption of UNSC Resolution 2401, are now completely ignoring their commitments in Syria,” it concluded.

The Council unanimously adopted the resolution in February 24. It ordered all warring parties to immediately stop hostilities and adhere to a long-term humanitarian pause across Syria to ensure the safe and unhindered delivery of humanitarian aid, as well as medical evacuation of those injured.

Moreover, the US army units stationed in the eastern districts of the Syrian province of Deir ez-Zor prevent the return of these territories under Syrian government control, the Russian Defense Ministry said in a statement on Saturday.

"One of the priorities of the Syrian authorities is the return of the population to the eastern districts of the Deir ez-Zor province, controlled by the pro-US units… The US army units located in these districts prevent restoration of the Syrian governmental institutions," the statement read.

The ministry specified that over 23,000 people returned to the districts of the Deir ez-Zor province which have been controlled by Damascus since December 1.