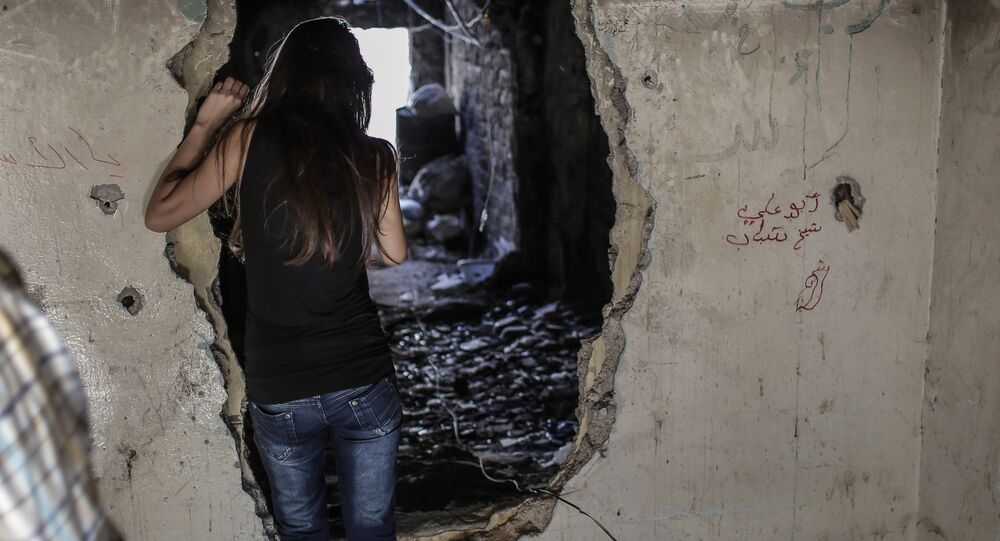 Foreign intervention, population brainwashing and selective information given by the media: seven years after the beginning of the conflict in her motherland, a Syrian woman living in Switzerland told Sputnik what she experienced in 2011 – namely her country being destroyed.

Talking to Sputnik on conditions of anonymity, the Syrian woman said that, being a representative of the Syrian elite, she initially did not oppose the idea of a change of power after Bashar Al-Assad's long reign. But she became seriously concerned after she learned about the so-called "Arab Spring."

"I saw how it began: I come from the generation that survived the beginning of developments in Lebanon [the 1975-1990 civil war in Lebanon — Sputnik]. I had conflicts with my French and Syrian colleagues, who thought that in a month the ‘regime' would fall and a good life would begin. I asked them: ‘Do you understand where this will lead to? The exchange rate of the Syrian lira will plunge, we will have 36,000 refugees like Lebanon had and the country will be destroyed. They will spark a religious war.' I thought back then: ‘Okay, let's say we want to oust the old regime, but we understand that our common future is threatened," she told Sputnik.

However, the people, including her friends and relatives, were already captured by the euphoria of "democratic changes," which everyone thought were imminently on the horizon.

"It was those who stayed abroad and did not see firsthand what was going on who encouraged the ignorant to go out in the streets. I lived in the country and I knew perfectly how things happened. I did not see democracy coming. When a housekeeper from rural areas tells you her children were paid 5,000 liras [some $100 back at the time] to go out to the street, you understand [why they went out.]"

"We saw a catastrophe looming over our country, all in accordance with a premeditated plan," the woman said. She remembers how the first "victories" of the opposition were reported and that there were talks of "liberation" of borders with Turkey and Iraq.

"That was where Daesh gushed into the country. I don't deny there were Syrian Daesh militants as well, the former inmates, but most of them came from abroad," she says.

© Photo : Fady Marouf
Russian Presence in Syria is 'Huge' and 'Legitimate' - Syrian Journalist
She also remembers the French and US ambassadors' trip to Hama, at the time the center of discontent with Syrian government and where the French diplomat expressed his support for Syrian citizens.

In order to understand the situation, you have to assemble all the pieces of the puzzle, which together imply not the coming of democracy but the destruction of the country, she says.

"I saw them destroying my country with my own eyes. Nobody wanted to do anything, whether because of ignorance or because they were [foreign] agents or because circumstances were stronger than them."

The silence of media

At the beginning of 2012, there were constant bombings. "Who reported them?" The woman points out that terror attacks in European cities occupied the mainstream media spotlight while Syrians, who faced these attacks "on a daily basis," interested no one.

She says the same selective coverage continues today, too.

"Why is nobody reporting the shells that keep falling on the civilian population of Damascus, but only reports Russian and Syrian Army bombardments? They talk about Eastern Ghouta every day, let them talk about school buses destroyed by missiles that fall on children's heads — they are silent about it. It's unjust."

She says that to get a comprehensive impression on a foreign country's situation, one must at least listen to both sides' opinions.

"Is it not up to the government to protect its citizens, especially considering that there are 6 million people in Damascus after the refugees returned? But the media keeps describing [only] what happens in the districts where the opposition is concentrated."

"Assad has no right to resign"

"I don't use the word ‘regime' anymore; it is a government, elected by the people," the woman says, pointing out that many people changed their mind. "Many say they were wrong, that they had no idea it would have come to that."

When asked about what her friends think about Assad and whether they think he must resign to stop the bloodshed, Sputnik's interlocutor is categorical.

"I don't worship the authorities, I advocate reforms. But if [Assad] resigns now, he will be a traitor. He has no right to resign. He will betray those supporting him, he will betray the memory of the victims. And if he goes, who would replace him?" she mulls.

The woman is convinced that sooner or later Assad will step down from office, but before that, it is necessary for him to remain, at least to "ensure security in major cities" and stabilize the situation in the country.