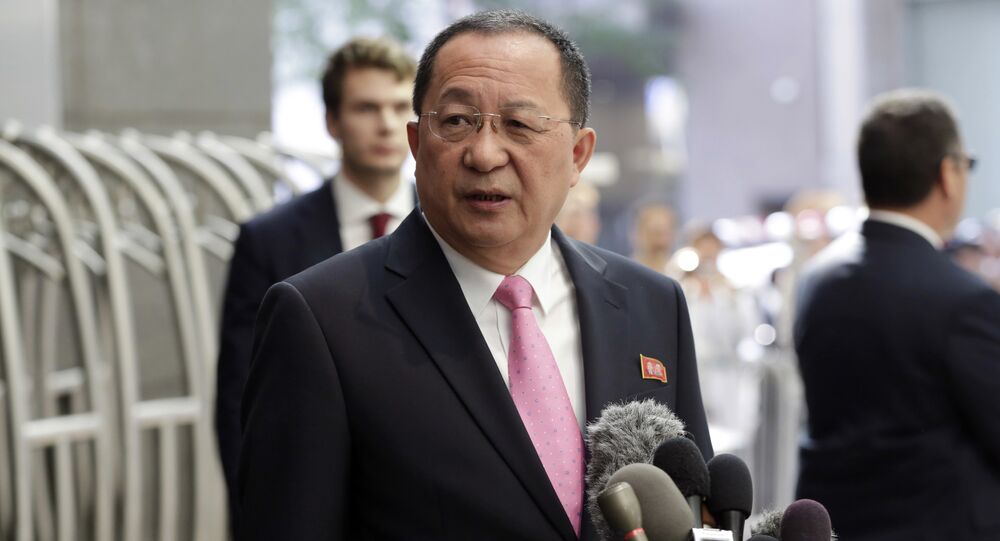 According to the news agency, Ri has already arrived in Beijing, but diplomatic sources have said that the minister is on his way to Sweden.

Sweden has an embassy in Pyongyang, which also represents US interests in North Korea.

Swedish Prime Minister Stefan Lofven said earlier in the month that his country, which has maintained diplomatic relations with North Korea for decades, could help US President Donald Trump arrange these talks since Washington and Pyongyang do not have formal ties.

© AFP 2021 / US NAVY/PH3 Joshua Karsten
US May Rein in Nuclear Subs, Carriers from War Games Near Korean Peninsula
South Korean media reported on Monday, citing a source at the South Korean presidential administration, that the North Korean leader hoped to sign a peace agreement with the United States as well as to establish diplomatic relations between the two countries.

The North Korean government has not provided any official information regarding this visit.

© Sputnik / Grigoriy Sisoev
Lavrov "Reveals Top Secret Info" on Russia's Meddling in Korean Crisis
On March 5-6, South Korea’s high-ranking delegation visited North Korea, where it held a meeting with the country's leader Kim Jong-un. After the delegation's return, the South Korean presidential office announced that Seoul and Pyongyang had reached a historic agreement on holding the third ever summit of the countries’ leaders in late April.

Additionally, Kim expressed his willingness to hold talks with the United States and Trump, as well as to suspend all nuclear tests and missile launches during the negotiations. Trump accepted the invitation to meet with Kim by the end of May.