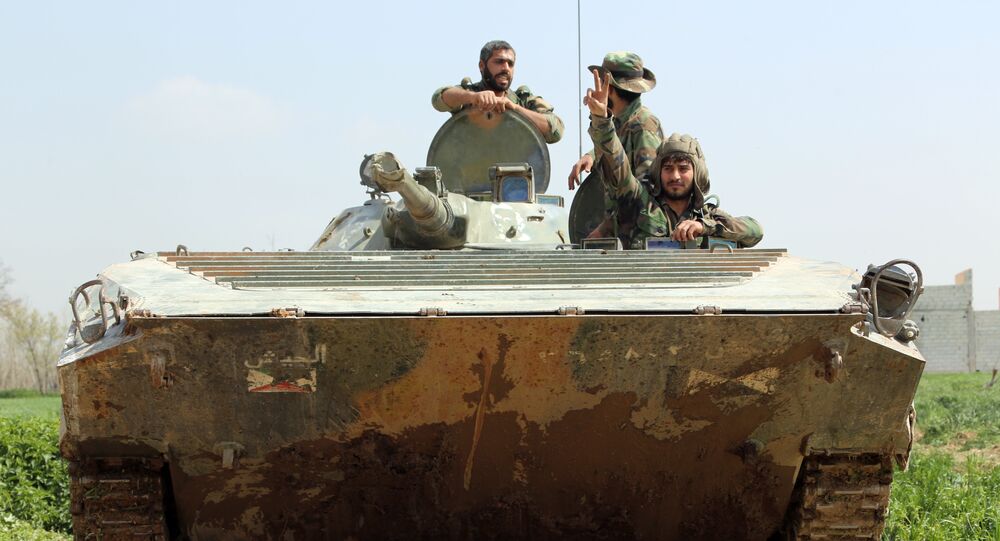 Earlier, the Russian military said that militants in Eastern Ghouta are considering letting several dozen of residents leave the area in exchange for free passage, together with their families.

According to media reports, the Syrian army has completely surrounded the major town of Douma, a Damascus suburb in eastern Ghouta, after advancing from Mesraba to Mudeira.

Advancing Syrian government forces joined troops from near the town of Harasta, splitting the remainder of the eastern Ghouta militant-controlled enclave in two.

On Thursday, according to media reports, the Syrian Arab Army managed to deploy near Douma, while other army units were reportedly advancing further, to Mesraba from Beit Sawa; troops were expected to launch a large-scale attack on the two towns.

© REUTERS / Bassam Khabieh
E Ghouta Militants Plan to Conduct Chemical Attack, Involving Several Women to Blame Damascus - Syrian Foreign Ministry
Earlier, the UN Security Council unanimously adopted resolution 2401, urging all parties to the conflict to immediately stop all clashes and adhere to a long-term humanitarian pause affecting the entire territory of Syria in order to ensure the safe and unhindered delivery of humanitarian aid supplies as well as provide medical evacuation of those injured. The ceasefire regime does not apply, however, to military operations against terrorist groups.

Eastern Ghouta was occupied by anti-government Islamist extremists in 2012. After the recent UN resolution, the fighting in the area didn't abate, even when the humanitarian pause was in place, the Russian Defense Ministry said. As militants constantly target all exits from the enclave, civilians cannot leave the area safely.