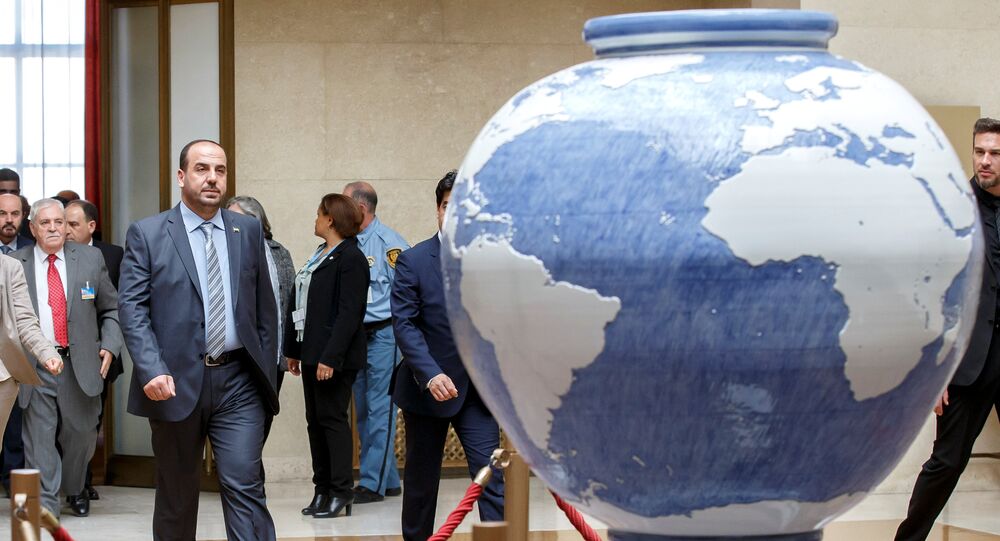 CAIRO (Sputnik) - The Turkish government has opened the border to tens of thousands of terrorists to infiltrate Syria, Syria's Ambassador to the United Nations Bashar Jaafari told Sputnik.

"The Turkish government has opened the border for tens of thousands of terrorists to enter Syria," Syria’s Ambassador to the United Nations Bashar Jaafari said.

He noted that the Turkish government committed to arming terrorists and financing their activities, set a camp for their military training on Turkey’s territory, and facilitated their access to chemical weapons.

According to Jaafari, terrorist groups allegedly inspired by the Turkish government robbed factories in Aleppo. The value of the loot is estimated to amount to tens of billions of US dollars.

He stated that Turkey did not stop after committing these crimes and launched direct aggression in Afrin. Jaafari stressed that Turkey in its official statements refused to comply with the provisions of UNSC Resolution 2401 on cessation of hostilities in Syria.

© CC0
Half a Million 'Captagon' Drug Tablets Were Found on Syrian Border
Last week, the UN Security Council unanimously adopted Resolution 2401 that urges all parties to the conflict to immediately stop all clashes and adhere to a long-term humanitarian ceasefire for at least 30 days across the entirety of Syrian territory in order to ensure the safe and unhindered delivery of humanitarian aid supplies, as well as the medical evacuation of injured people. However, truce violations continue to take place in the crisis-torn country, including in Eastern Ghouta. Turkish President Recep Tayyip Erdogan criticized the resolution, noting that Ankara has been conducting operation only against terrorists.

On January 20, Ankara, jointly with the opposition Free Syrian Army forces, launched Operation Olive Branch in Afrin in order to "clear" Turkey's Syrian border from the terrorist threat. Turkey considers the PYD, a Kurdish political party in northern Syria, and the YPG militia to be linked to the Kurdistan Workers' Party (PKK), listed as a terrorist organization by Ankara.