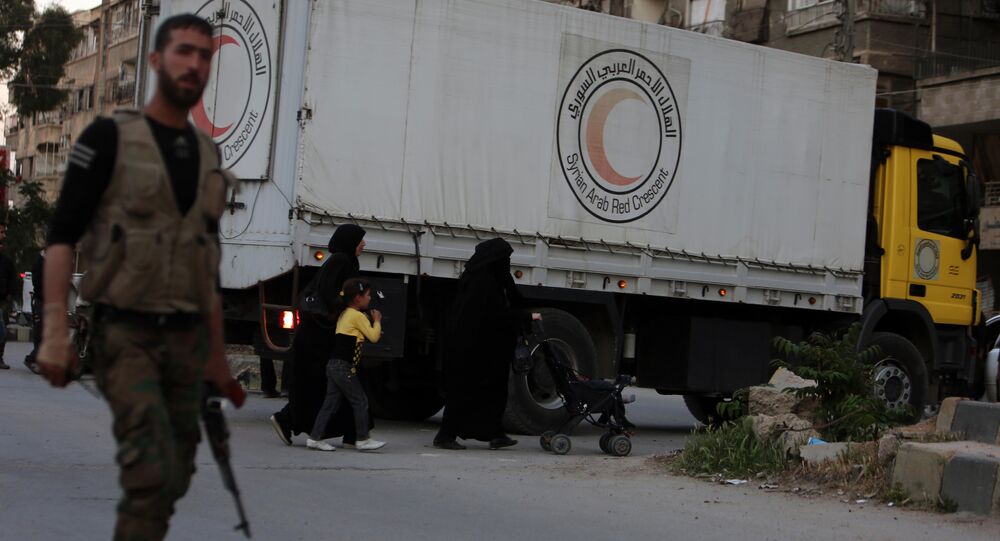 EASTERN GHOUTA (Syria) (Sputnik) - The humanitarian convoy of the Syrian Arab Red Crescent that delivered aid to the residents of the town of Douma on Monday arrived at the Muhayam-Al-Wafedin checkpoint bringing 13 evacuees from Eastern Ghouta, a Sputnik correspondent reported.

According to the correspondent, the militants held the convoy for one-and-a-half hours in the "gray zone" between the Muhayam Al-Wafedin checkpoint and Eastern Ghouta. However, as a result of the efforts of the Russian center for Syrian reconciliation, an agreement was reached to allow the convoy to pass.

The center earlier said that the convoy of 45 trucks delivered 247 tonnes of humanitarian aid to residents of Douma.

© AFP 2020 / RAMI AL-SAYED
Russian Military: Al Nusra Terrorists Shelled Convoy in Eastern Ghouta
Earlier, Russian military reported that the militants in Eastern Ghouta have intensified the shelling of Damascus and the Muhayam-Al-Wafedin humanitarian corridor from the territory controlled by the Jaysh al-Islam militants.

The Russian center for Syrian reconciliation said earlier in the day that the militants in Eastern Ghouta promised to release the civilians in exchange for humanitarian aid. Dozens of trucks with food, medicine and basic necessities and a mobile hospital lined up at the checkpoint in Muhayam-Al-Wafedin settlement, where the humanitarian corridor toward Eastern Ghouta begins.