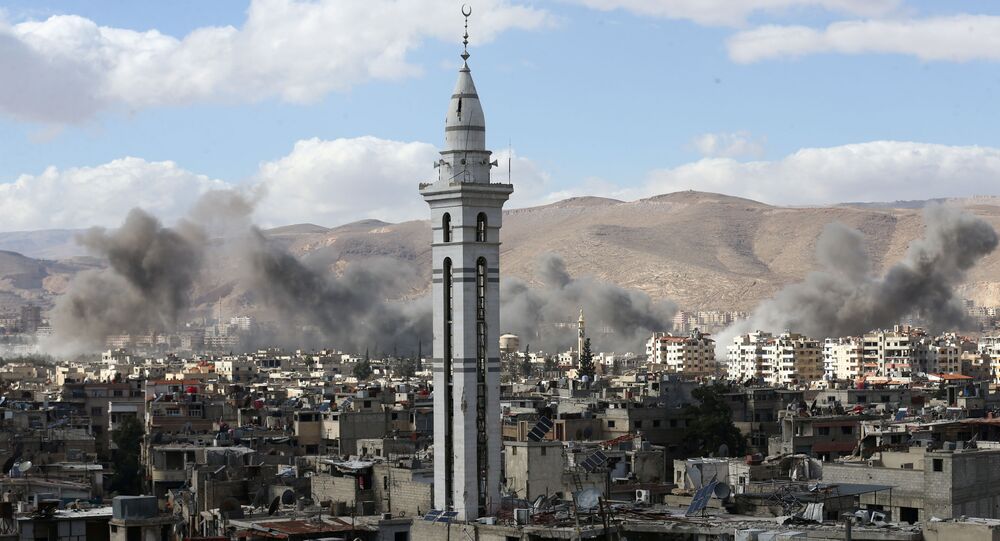 When asked whether the United States is considering any sanctions against Russia for its support Damascvus in Eastern Ghouta, Nauert said Thursday, "We never forecast sanctions."

Nauert also noted that the State Department is also engaged in other diplomatic efforts to apply pressure on the Syrian government.

"We are engaging in talks with the Russians in Geneva, the State Department is. We are investigating various mechanisms that would hold Russia and the Syrian regime accountable for using chemical weapons on its own people," she explained.

© REUTERS / Bassam Khabieh
Russia Sends Detailed Explanation on Eastern Ghouta to UN Envoy
Damascus suburb of Eastern Ghouta is one of the Syrian de-escalation zones that were created during the Astana talks on Syrian reconciliation, with Russia, Iran and Turkey serving as guarantors of de-escalation agreements. Violence has escalated there in recent weeks.

On Saturday, the UN Security Council unanimously adopted Resolution 2401 that urges parties to the conflict to immediately stop all hostilities and adhere to a long-term humanitarian pause across Syria in order to ensure the unhindered delivery of humanitarian aid, as well as medical evacuation of those injured.

In turn, Russian Defense Minister Sergei Shoigu announced on Monday that a new daily humanitarian pause in Eastern Ghouta would start on Tuesday on 09:00 and last until 14:00 local time (07:00-12:00 GMT).

In addition, the United States views Russia's call for a humanitarian corridor in Syria's Eastern Ghouta as a joke, Heather Nauert said.

© AP Photo / Syrian Civil Defense White Helmets
Russia to Proceed With Implementing UNSC Truce Resolution in Eastern Ghouta
“People are afraid to use that, they are afraid if they tried to leave Eastern Ghouta that they could be conscripted into working with [Syrian President] Bashar al Assad, that they someday may not be able to go home or they could be killed,” Nauert said. “What needs to happen instead is a nationwide ceasefire that was voted upon unanimously at the United Nations last Saturday.”

However, Washington's accusations against Moscow of alleged non-compliance with its obligations in Syria are aimed at preserving the extremist enclave in Eastern Ghouta, Russian Embassy in the United States said Friday.

"The sweeping propaganda campaign launched by Washington, consisting of accusations that Russia had failed to comply with its obligations in Syria, suggests that it is not a matter of concern for lives of peaceful Syrians, but a cold-blooded political forethought: to keep the extremist enclave in a suburb of the Syrian capital whatever it takes," the embassy said on Facebook.

Moreover, Russia warns the United States against an attempt to use unsubstantiated accusations of chemical attacks as a pretext for strikes on the Syrian authorities' facilities, the Russian Embassy in the United States said Friday.

© REUTERS / Bassam Khabieh
Moscow Aware of Prepared Provocations in Syria Involving Chemical Weapons, Aimed to Blame Damascus - Russian Envoy to UN
"Recent calls by the U.S. Administration representatives to hold Russia accountable for the alleged use of chemical weapons by Damascus is a graphic illustration of pure cynicism. This occurs as the Administration itself acknowledges the absence of related evidence. This evidence never existed before. Fake claims by the 'White Helmets', that have totally discredited themselves, as well as other pseudohumanitarian non-governmental organizations that receive Western allowance are nothing, but cheap farce. We warn the U.S. against temptation to use such ‘evidence’ as a pretext to attack Syrian government facilities," the embassy said in a statement.

Eastern Ghouta, located on the outskirts of Damascus, is one of four Syrian de-escalation zones that were created during the Astana talks on Syrian reconciliation. Russia, Iran and Turkey serving as guarantors of the de-escalation agreements, which do not apply to the Islamic State or al-Qaeda terrorist groups (both banned in Russia) or their affiliates.

Violence has escalated in recent weeks in Eastern Ghouta, where the al-Qaeda-linked Nusra Front has launched daily rocket and mortar attacks on Damascus. Russian officials have blamed Nusra for the escalation in violence.