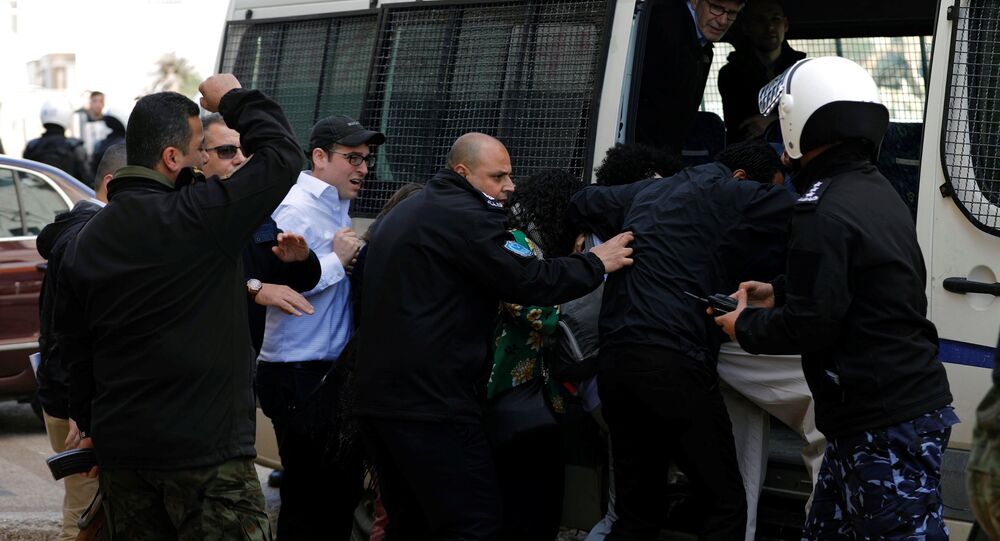 US President Donald Trump's decision to recognize Jerusalem as Israel's capital and cut funding to the UN agency for Palestinian refugees apparently continues to backfire.

Several dozen Palestinians threw eggs and vegetables at New York City Council members who met a Palestinian polling company in the city of Ramallah, according to media reports.

The Palestinians also chased the bus of the US delegation in a show of protest against last year's decision by US President Donald Trump on Jerusalem.

Some protesters carried Palestinian flags and held signs reading, in particular, that "the US is part of the problem, not the solution."

Condemning the move, US State Department for its part said that "the United States absolutely opposes the use of violence or intimidation to express political views."

Announcing the recognition of Jerusalem and the Israeli capital on December 6, 2017, Trump instructed the State Department to move the US embassy there from Tel Aviv, causing a huge wave of criticism in numerous countries, especially Arab states.

The Islamist movement Hamas was quick to announce the Third Intifada after Trump's move, which was also followed by Israel shelling Gaza and Palestinians responding in kind.

In mid-January, State Department spokeswoman Heather Nauert declared that they were withholding 65 million dollars out of a 125-million-dollar aid package allocated for the UN Relief and Works Agency for Palestinian Refugees (UNRWA)- funds that she said will be "frozen for future consideration."

Israel considers Jerusalem to be its capital; its territory includes the city's eastern districts, which were seized by Tel Aviv from Jordan during the Six-Day War in 1967.

The international community does not recognize the annexation of East Jerusalem, emphasizing that its status should be based on an agreement with the Palestinians, who claim the eastern part.