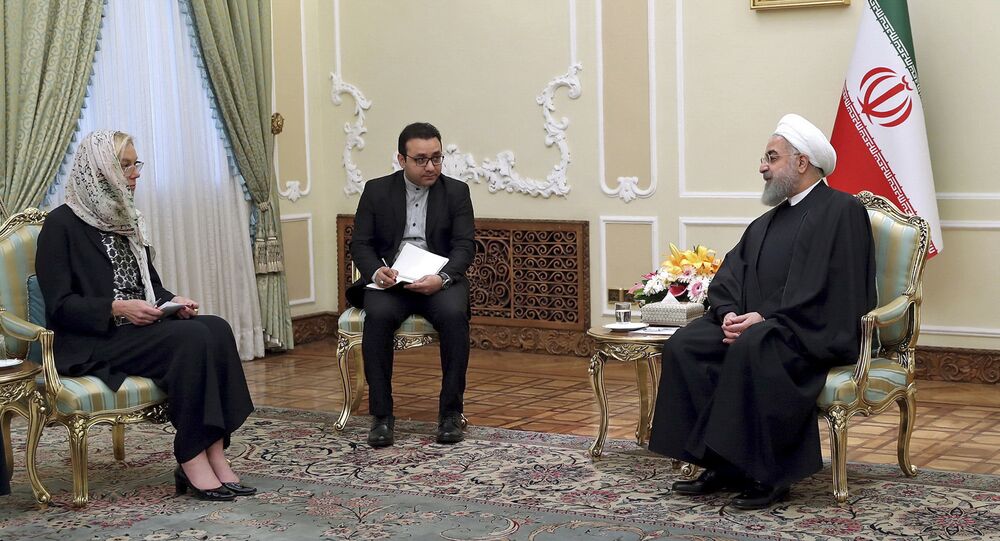 Hassan Rouhani commented on Wednesday on reports concerning the country's alleged missile shipments to Yemen during a meeting with Dutch Foreign Minister Sigrid Kaag, who arrived in Tehran a day earlier for talks with Iranian officials.

President Hassan Rouhani has urged Saudi Arabia and its allies to stop their "blame game" against Iran over Yemen's crisis, saying they should instead make efforts towards ending the deadly war against the impoverished nation and pave the ground for an intra-Yemeni dialog.

He rebuffed the accusations against Iran of missile shipments to Yemen as "completely wrong and baseless," saying such allegations will not resolve the current problems.

"Instead of fabricating such accusations, efforts should be made to immediately end the war on Yemen, establish a ceasefire there, provide humanitarian assistance to violence-stricken people, and finally pave the ground for intra-Yemeni talks," Rouhani said.

Thereafter Rouhani touched the Joint Comprehensive Plan of Action in his comments, saying that "the Islamic Republic will do its utmost to preserve the agreement, and will, undoubtely, not be the party initiating its violation among the seven countries."

The Iranian president also stated there were "extensive capacities" for the development of collaboration between Iran and the Netherlands. The current trade volume stands at around €1 billion, which has to increase, he emphasized, talking about establishing stronger ties with the Dutch government.

The statements were made during the visit of the Netherlands' Minister of Foreign Trade and Development Cooperation Sigrid Kaag visit to Tehran.

In Iran for the third part of my visit to the region. Started off with a meeting with Iranian and Dutch businesses. Met a lot of inspiring people. pic.twitter.com/tTWqs3KvCl

Kaag, for her part, drew attention to the European Union's continued commitment to the JCPOA, and the role the agreement plays in the development of bilateral relations.

© REUTERS / Ruben Sprich
Iranian FM: Foreign Spying Efforts Made Phone ‘Hot as an Iron’ During Nuclear Talks
She stressed the need for the continuation of talks between Tehran and the JCPOA countries in order to build trust in areas of common interest.

Sigrid Kaag also mentioned Iran's missile program, and said her country recognized the Islamic Republic's right to maintain a defensive military program, and considered such a program to be legitimate.

READ MORE: Bone of Contention: Why EU Unlikely to Join US' Crusade Against Iran

The JCPOA was signed in July 2015 by Iran, China, France, Russia, the UK, the US, and Germany. The agreement specifies a gradual lifting of sanctions imposed on Tehran in exchange for the latter maintaining the peaceful nature of its nuclear program.