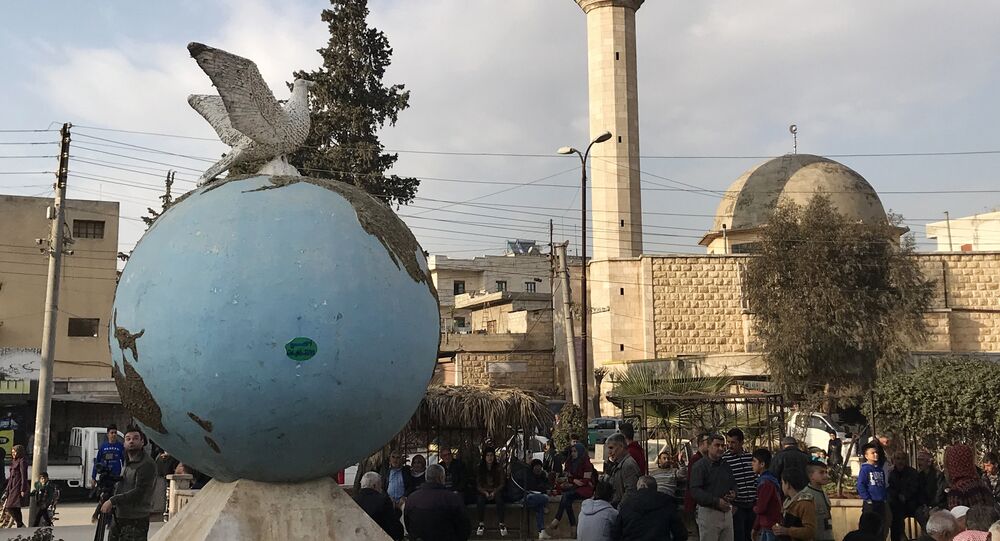 BEIRUT (Sputnik) - The Kurdish militias and the Syrian government have reached an agreement on the deployment of the Syrian Armed Forces in Syria's district of Afrin, Lebanese media reported on Thursday.

The decision was made in order to protect the district and counter the attacks of Turkey or its allies in Afrin, Mayadeen broadcaster reported, citing a source with a knowledge of the situation.

A source familiar with the situation told Sputnik on Thursday that the Syrian Armed Forces would enter the territory near the border with Turkey in the district of Afrin in the next few days.

"The agreement has been reached on the deployment of the Syrian Armed Forces at the Syrian-Turkish border in Afrin in the north of Aleppo in the next few days. The agreement was reached between the Syrian government and the Kurds," the source said.

© Sputnik / Mikhail Alaeddin
'Foxhunt': Life in Kurdish Afrin's Heartland Amid Turkish Operation Olive Branch
However, the US State Department is unaware of an agreement that is expected to see the Syrian Armed Forces enter the enclave of Afrin in northern Syria, a spokesperson told Sputnik.

"No, I don’t," the State Department spokesperson said on Thursday when asked to comment on a deal that paves the way for the Syrian Armed Forces to enter Afrin.

Turkey has been waging a military campaign Olive Branch against Kurdish forces in Afrin since January. The enclave is controlled by the US-backed People's Protection Units (YPG), which Ankara considers to be an affiliate of the Kurdistan Workers' Party (PKK), designated as a terrorist organization in Turkey and several other countries.

Damascus has strongly condemned Ankara's actions, with the Syrian Foreign Ministry calling the campaign a violation of the country's sovereignty.

On Thursday, Turkish Defense Minister Nurettin Canikli said at the NATO ministerial session in Brussels that the Alliance had raised no objections to the ongoing Ankara's Olive Branch military operation.

"The NATO secretary general has always been one of the people, who has very positive stance on our struggle against external threats and I am grateful to him for it. There is no negative attitude of the secretary general to the Olive Branch. The NATO member states also accept our activities in Afrin understandingly. There is no talk about NATO's demand to end the operation," Canikli told Turkish reporters in Brussels, as quoted by the NTV broadcaster.

"In fact, the YPG is the PYD/PKK’s Syrian offshoot. This is also confirmed by British and American intelligence. Whatever their names are, their main purpose is to violate peace in the region and create new troublesome fields. In the fight against terrorists Ankara hopes for greater allied support," Yildirim said at a joint conference with German Chancellor Angela Merkel in Berlin, as quoted by the Anadolu news agency.

The prime minister also expressed hope that the West would show the same determination to eradicate the PKK, PYD and YPG, as it was in the fight against the Daesh.