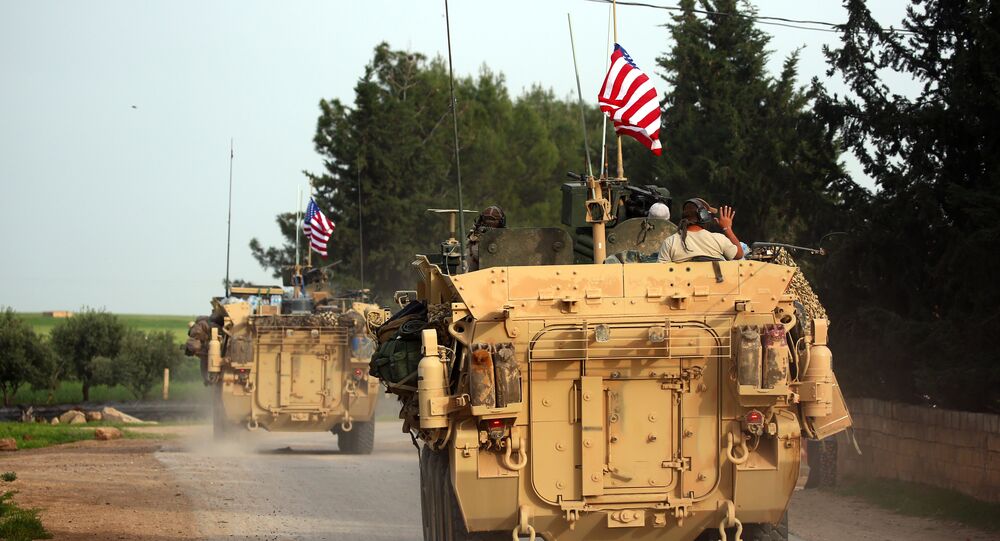 The pro-government Syrian militiamen have come under attack by the US-led coalition while they were conducting an operation against Daesh terrorists north of the city of Deir ez-Zor. The information about the incident contradicts US claims that the Syrian militias attacked Washington’s allies.

Russia's UN Ambassador Vasily Nebenzia said on Thursday he will raise the issue of the US attack against pro-government Syrian forces at the upcoming UN Security Council closed-door briefing on the humanitarian situation in the war-plagued nation.

"That's very regrettable, we will raise that issue, we will ask them what happened," Nebenzia told reporters.

Russian Foreign Ministry spokeswoman Maria Zakharova said earlier in the day that Moscow is analyzing the information about the attack, stressing that the version from the American side raises a number of questions.

"First of all, how can a 500-strong unit attack a headquarters with the support of tanks and artillery and injure only one of the attackers?" Zakharova stressed during the weekly briefing on Thursday. "How could the people inside the headquarters be able to survive in these conditions for at least half an hour that is needed for aviation to arrive at the scene? How could a decision to open a massive fire to defeat the Syrian militiamen be made in such a short period of time?”

The ministry is collecting the information to clarify the situation, Zakharova added.

US Version of the Events

US Air Force
Analyst: Pentagon Feels Free to Bomb Whatever It Wants in Syria
According to the United States Central Command (CENTCOM), the incident occurred eight kilometers to the east of the demarcation line between the areas controlled by Damascus and the Syrian Democratic Forces (SDF), allies of the US.

The US-led coalition has described the attack as retaliation for an "unprovoked attack" by pro-government armed militias on the headquarters of the Syrian Democratic Forces (SDF).

“In defense of Coalition and partner forces, the Coalition conducted strikes against attacking forces to repel the act of aggression against partners engaged in the Global Coalition's defeat-Daesh mission,” the statement reads, adding that the US-led coalition will continue its operation in the Middle Euphrates River Valley to eliminate Daesh forces.

US Department of Defense spokesperson Dana White announced that the US-led coalition had informed Russia of its actions in advance.

ABC news reported later citing an unnamed US official that as many 500 militiamen were reportedly hit during what he described a coordinated attack against US allies. He added that 100 Syrian militiamen were killed as a result of the incident.

The Russian Defense Ministry said on Thursday that one of the units of pro-government Syrian militia was carrying out a reconnaissance operation near the former Al-Isba oil refinery in Deir ez-Zor province when they were attacked by the US-led coalition's aircraft.

"While carrying out the task, militiamen were subjected to sudden mortar shelling and artillery rocket fire; after that the helicopters of the US-led international coalition struck them," the statement reads, saying that a total of 25 militiamen were wounded in the attack.

© Sputnik / Vladimir Pesnya
Moscow Slams Washington for Unfounded Accusations Over Syrian Chemical Attacks
The ministry pointed out that the incident occurred because the operation of Syrian militiamen "was not coordinated with the command of the Russian task force," adding that there are no Russian servicemen in that area of Deir ez-Zor. The militiamen launched the operation to deal with the attacks on the posts of the Syrian government forces by one of the Daesh cells in the area, the statement added.

The Defense Ministry highlighted that the attack on the militia showcased that the real goal behind Washington's "illegal military presence in Syria" is control over the country's economic assets rather than defeating the terrorist group Daesh.

The Syrian Foreign Ministry has blasted the US-led alliance for the attack, urging the United Nations to bring the military bloc to account, according to the SANA news agency.

"This is a new act of aggression that constitutes a war crime and a crime against humanity, shows the direct US support for terrorists who and is aimed against sovereignty and integrity of Syria," SANA cited the Foreign Ministry as saying.

Earlier, Syrian state TV has slammed the incident as "new aggression" by the US and "an attempt to support terrorism."

US Military Presence in Syria Remains a Challenge to Peace Process

The US military presence in Syria presents a serious challenge to the peace process and thwarts the protection of the country's territorial integrity, Russian Foreign Ministry spokesman Maria Zakharova said Thursday.

"A 55-kilometer zone unilaterally created by Americans around their military base near al-Tanf is being used by the scattered units of Daesh terrorists," Zakharova said during the weekly briefing, stressing that the extremists have the opportunity to hide from the government forces in the area as well as regroup and prepare for new raids in the Syrian deserts.

© AP Photo / Hammurabi's Justice News
In this photo taken on Tuesday May 23, 2017, provided by the Syrian anti-government activist group, the Hammurabi's Justice News, which has been authenticated based on its contents and other AP reporting, shows a U.S.-backed anti-government Syrian fighter form Maghaweer al-Thawra stands on a vehicle with heavy automatic machine gun, left, next of an American soldier who also stands on his armored vehicle, right, as they take their position at the Syrian-Iraqi crossing border point of Tanf, south Syria

She went on to underscore that the US presence remains "a serious challenge to the promotion of peace in Syria and the protection of its unity and territorial integrity."

"Some influential external players are apparently not using the opportunities they have to promote a political settlement in Syria and facilitate the elimination of terrorists on Syrian soil."

The US-led coalition of over 60 states has been conducting a military operation in Syria without the consent of the country's government or UN approval.