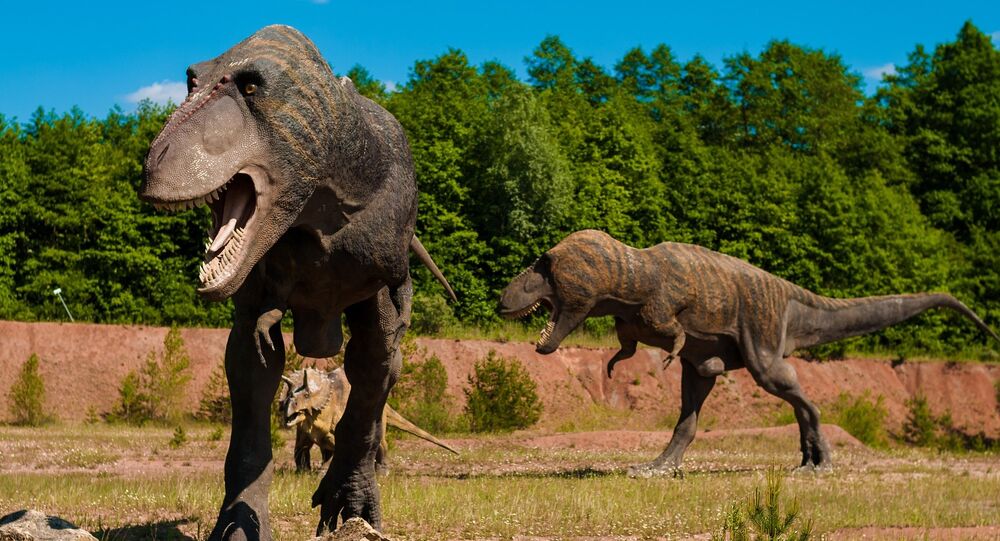 The skeleton belongs to a dinosaur which inhabited the African continent during the Cretaceous period; finding remains from that time in Africa is considered a great piece of luck. A member of the paleontology team and research fellow from Mansoura University, Sana al Seid, revealed details about the discovery in an interview with Sputnik.

Scientists have found bones of a dinosaur belonging to a previously unknown species in the Sahara desert in Egypt.

The dinosaur belongs to the group of titanosaurs — herbivorous dinosaurs with long necks and tails, comparable to modern elephants in size.

A deputy director of the Mansoura University Vertebrate Paleontology center (MUVP), Sana al Seid, told Sputnik that the discovery "was the culmination of the hard years of work of our archaeological group."

The species has been called Mansourasaurus shahinae, in honor of the university that the paleontologists represent.

The scientist revealed that at the beginning, there was no certainty that the remains of the dinosaur would be found.

"We read books and believed them, for example, ‘Geology of Egypt.' According to it, we determined the place where to start our search […]. In 2013, the first discovery was made," al Seid said, adding that it inspired following years of hard work and challenges.

According to the scientist, the expedition "was especially hard for young women. For example, our last camp in the desert, in which we spent 21 days, had neither a shower, nor any other conditions necessary for life."

In addition, it was not easy to get the consent of the parents to let their daughters go to the desert, where they had to live in tents with strangers, al Seid noted.

"We spent a long time looking for the remains of a dinosaur. And then at some point Dr. Sarah Saber found a bone and called us and the whole team of archaeologists. They confirmed that these are the bones of a dinosaur (…)," the scientist said.

"In the evening, after a whole day of emotions, we finally got a feeling of fear. Before that, we did not think of anything, except work. We were constantly planning, searching, digging. And now, the goal was fulfilled. And then we finally knew why our parents were so worried about us. After all, we were completely cut off from the whole world; we were only brought water and food. The desert is dangerous, but we only had shovels and buckets," she added.

At the same time, the Egyptian paleontologist believes that the discovery sends a positive signal to the country's society and to Arab women in particular.

"This discovery is a message for all Egyptian and Arab women, that we can write history and overcome the difficulties arising in the way," al Seid concluded.

© CC0
Prehistory Lost: Vandals Destroy Dinosaur Footprint in Australian Park
The remains are the most complete skeleton of a terrestrial vertebrate found in Africa which that inhabited the continent during the Cretaceous period. It is extremely rare that someone finds remains from that period in the region.

According to a study published in the journal Nature Ecology and Evolution, the dinosaur lived in north-west Africa 94-66 million years ago. The scientists found well-preserved shoulder bones, scapula, fragments of the skull and several vertebrae and ribs. Based on the remains of the skeleton, the researchers suggest that the animal was 8 to 10 meters long, while its weight could reach 7 tons.