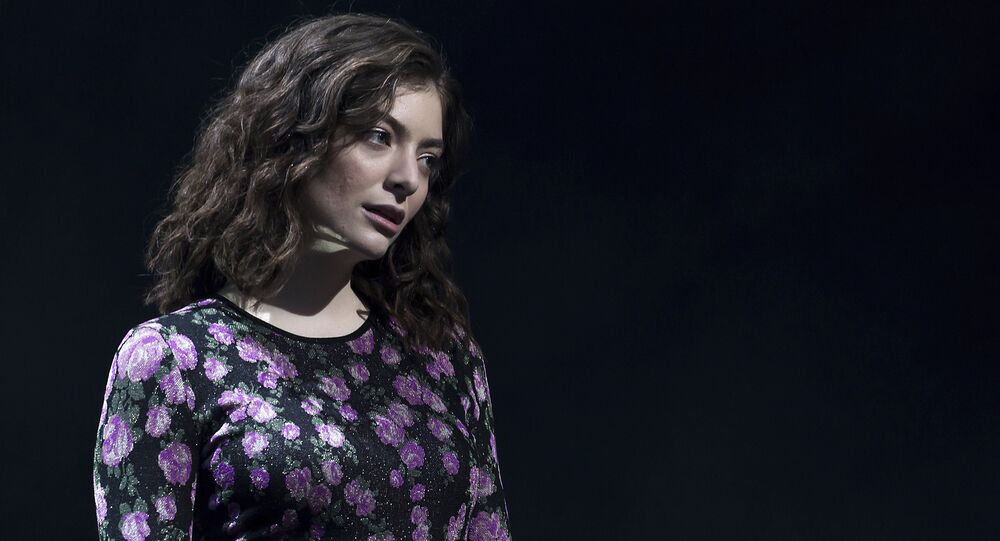 On Tuesday, an Israeli legal rights group filed a lawsuit against two New Zealanders for allegedly persuading pop singer Lorde to cancel her June 2018 concert in Israel under a controversial 2011 Israeli law that allows civil lawsuits to be filed against those urging a boycott of Israel or of lands it has occupied.

Israeli-American activist and author Miko Peled told Radio Sputnik's Loud & Clear program that the Israeli legal group is "fighting a losing battle" and very likely using the law as a "tactic to scare off other artists that refuse to perform in Israel out of principle."

​Last year, New Zealanders Justine Sachs and Nadia Abu-Shanab wrote an open letter to Lorde calling on her to "take a stand" and "join the artistic boycott of Israel."

The women, who referred to themselves as activists working to end Israeli apartheid, also explained that they believed "an economic, intellectual and artistic boycott is an effective way of speaking out."

The singer-songwriter replied to a tweet of the letter, writing, "Noted! Been speaking [with] many people about this and considering all options. Thank u for educating me I am learning all the time too." She cancelled her Tel Aviv show just days after her tweet.

According to the Israel legal rights group Shurat HaDin, the New Zealanders knew the letter could result in a boycott, meaning they can be sued under the contentious 2011 law. The group is filing the lawsuit on behalf of three Israeli fans for about $13,000 in "emotional injury" damages. This is the first time the controversial law will be tested in court.

Several media outlets, including Billboard and Fox News, that reportedly contacted Sachs on Twitter claim that the activist was unaware of any lawsuits until media reports broke.

"This lawsuit is an effort to give real consequences to those who selectively target Israel and seek to impose an unjust and illegal boycott against the Jewish state," said Nitsana Darshan-Leitner, the group's head and a lawyer representing the plaintiffs, the Guardian reported. "They must be held to compensate Israeli citizens for the moral and emotional injury and the indignity caused by their discriminatory actions."

However, according to Peled, the chances that Shurat HaDin will win the lawsuit are very slim.

"I think [the lawsuit] is a long shot. They're [Shurat HaDin] pulling all their stops. I think they're seeing support for boycotts against Israel grow and become more threatening, more effective, more popular," Peled told hosts John Kiriakou and Brian Becker.

"They're hearing the voices of Palestinians around the world becoming louder and louder, more clear and more acceptable. They're seeing Bernie Sanders meeting with Issa Amro," Peled noted, referring to the Palestinian activist facing trial in Israel for what Sanders and several other Congress members believe is political persecution intended to stifle his activism.

"They just banned the American Friends Service Committee and Code Pink from entering Israel. They're losing their mind in a way. It's complete nonsense. They think they can fight this. They think you can legislate to stop a movement, but you can't," Peled added.

In fact, Peled believes that Israel is sabotaging itself by filing a lawsuit against the Boycott, Divestment, Sanctions (BDS) movement, the Palestinian-led movement fighting for the freedom, justice and equality of Palestinians by putting non-violent pressure on Israel to comply with international law and end the occupation of Arab lands.

"The artists that refuse to perform do it out of principle. It's not about money and it's not about business. It is about principle. Israel is hurting itself by bringing [this lawsuit] up and stirring it over and over again. It brings to light how insane they are, how desperate they are and how extreme they are. They are attempting to stir something up when there is no way they can win," Peled told Radio Sputnik.

Becker chimed in, calling the legal rights lawsuit a "fundamental embarrassment for a state supposedly founded on the ideas and principles of democracy."

Peled said, "Israel is pretending to be a democracy — although they value the existence of a Jewish state above democracy. Maintaining a Jewish majority on occupied Palestinian land is the most important thing to them. I was at a conference in 2015 or 2016 in Jerusalem when a ‘how do we fight the BDS movement' conference was taking place. There were all these politicians, journalists and Jewish millionaires who contribute to pro-Israeli groups at the conference. There were even event promoters at the conference trying to downplay what it means when big names cancel their performances in Israel," Peled recalled.

On Tuesday, a US federal judge blocked a controversial Kansas law designed to indict people who boycott Israel, calling it an infringement of the US Constitution's first amendment.

In July 2017, the American Civil Liberties Union (ACLU) sent a letter to Congress opposing the Israel Anti-Boycott Act introduced in the House and Senate in March 2017 by Maryland Senator Ben Cardin.

In the letter, the ACLU claimed that "by penalizing those who support international boycotts of Israel [the act] seeks only to punish the exercise of constitutional rights."