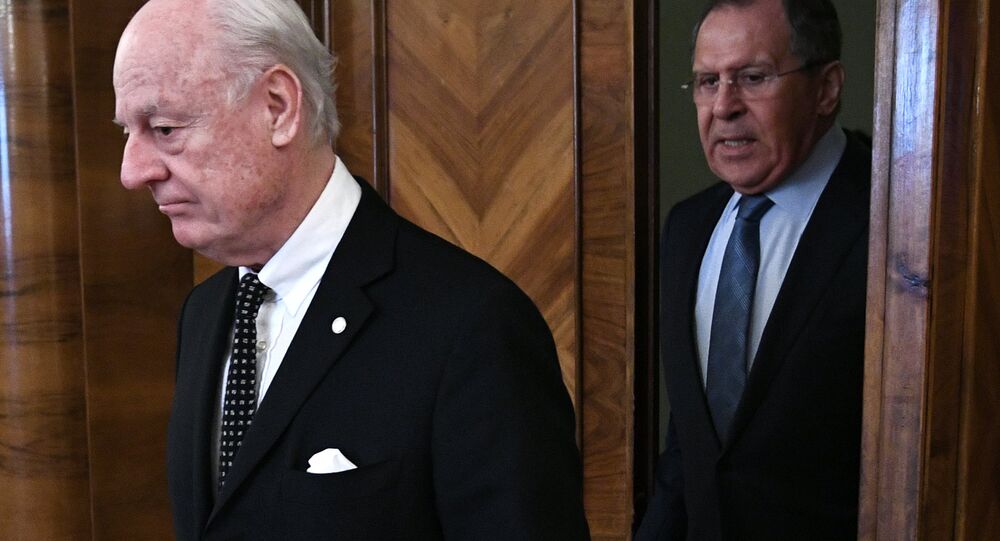 "The Russian minister reiterated the special importance of this event for the success of the political settlement of the Syrian crisis in full accordance with the parameters set forth by UN Security Council Resolution 2254," the ministry said in a statement.

As UN Envoy for Syria Staffan de Mistura has commented on the preparations, he himself will decide whether to attend the Syrian National Dialogue Congress in Sochi after the conclusion of negotiations in Vienna.

Speaking about the upcoming event, head of the Syrian government delegation in the Vienna talks Bashar Jaafari stated that all-inclusive national dialogue between different sections of Syrian society will define the outcome of it.

"As a matter of fact, the outcome of the conference to be held in Sochi will be a result of a dialogue to be held between the Syrian participants among themselves. The goal of the conference in Sochi is to engage in national, intra-Syrian dialogue without foreign interference," Jaafari told reporters on Friday after final talks with UN Special Envoy for Syria Staffan de Mistura.

The diplomat underlined that the Vienna Intra-Syrian round of talks was in fact focused on the upcoming meeting in Sochi.

"Yesterday and today we held talks with the UN special envoy and we tried to make them as constructive as possible, especially on the eve of Sochi conference," he added, adding that the conference will be attended by about 1600 participants.

The event will be held in Russia's Black Sea resort of Sochi on January 29-30, with invitations to participate sent to UN representatives and observers from Great Britain, China, the United States and France — as permanent member of the UN Security Council, as well as to Egypt, Jordan, Iraq, Kazakhstan, Lebanon and Saudi Arabia. All the invitations were sent by a special representative of the Russian president for Syria Alexander Lavrentiev on behalf of states — peace guarantors in Syria:  Russia, Iran and Turkey.

The US side has confirmed the receipt of the invitation, but not yet verified the attendance.

On Thursday, a special two-day meeting on Syrian settlement started in the UN headquarters in Vienna. Both the Syrian government and the Syrian Negotiation Commission (SNC) had been invited to participate. The two-day round, which is being held within the framework of the UN-facilitated Geneva political process, moved to the premises of the United Nations in Vienna from the UN headquarters in Geneva, where it has been held previously, due to "logistical reasons."

Previously, the Syrian settlement process was ensured by the efforts of the International Syria Support Group (ISSG), chaired by Russia and the United States. However, after the change of the US administration in early 2017, US President Donald Trump did not show any definite intention to be particularly involved in the Syrian issue. The three states which have a strong interest in and influence on Syria — Russia, Turkey, and Iran — decided to use this window of opportunity by taking the settlement process into their own hands.

Thus, a new negotiations platform in the Kazakh capital, Astana in early 2017, with Russia, Turkey, and Iran taking on the roles of guarantors of the peace settlement in the war-torn country.