MOSCOW (Sputnik) - The United States has unleashed a massive propaganda against Russia by accusing Moscow of the involvement in alleged chemical weapons use in war-torn Syria, the Russian Foreign Ministry said late on Wednesday.

"On January 23, a number of high-ranking US officials slandered the Russian Federation and the Syrian Arab Republic in an attempt to blame them for the incidents involving the use of chemical weapons during the conflict in that country," the ministry said in a commentary.

"Essentially, a massive propaganda attack has been undertaken to blacken Russia on the world stage and undermine efforts for a peaceful settlement in Syria," the ministry stressed. 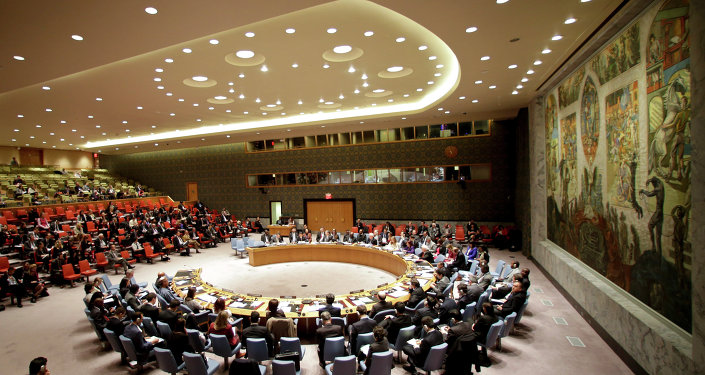 © AP Photo / Frank Franklin II
China Welcomes Russian Resolution on New Chemical Weapons Investigative Mechanism in Syria
According to the ministry, the latest series of "hypocritical" accusations against Russia aim at hampering the objective investigation of alleged chemical attacks in Syria as Washington is not interested in finding real perpetrators of these attacks.

At the same time, the ministry called on other participants of the Paris meeting on January 23 to distance themselves from the documents adopted there under US pressure.

"We call on our colleagues to think about what the US is trying to do, and to distance themselves from this risky adventure, which has nothing in common with the goals announced by its organizers," the ministry stressed.

The White Helmets, a rescue group that operates in militant-held Syrian areas, on Monday accused Syrian forces of using chlorine gas in eastern Gouta near Damascus in an air attack.

The Russian Foreign Ministry said the incident had not been confirmed independently and accused the group of associating with "terrorist groups." It accused the United States of not seeking any proof of Syrian government's or Russia's involvement and apportioning the blame based on its own "geopolitical ambitions." © REUTERS / Omar Sanadiki
Damascus Slams US, French Diplomats' Claims on Chemical Weapons Use as 'Lies'
"On January 23 US representatives categorically rejected at a UN Security Council session our draft resolution on the creation of a new, unbiased and truly efficient mechanism to replace JIM (Joint Investigative Mechanism). The Americans don’t need instruments to conduct fair probes. They need only new pretexts to accuse the Syrian authorities and now Russia," it said.

The Russian ambassador to the UN, Vassily Nebenzia, said Wednesday that consultations at the UN Security Council on Russia's draft resolution on a mechanism for the investigation into the use of chemical weapons in Syria might be held on Thursday or Friday.