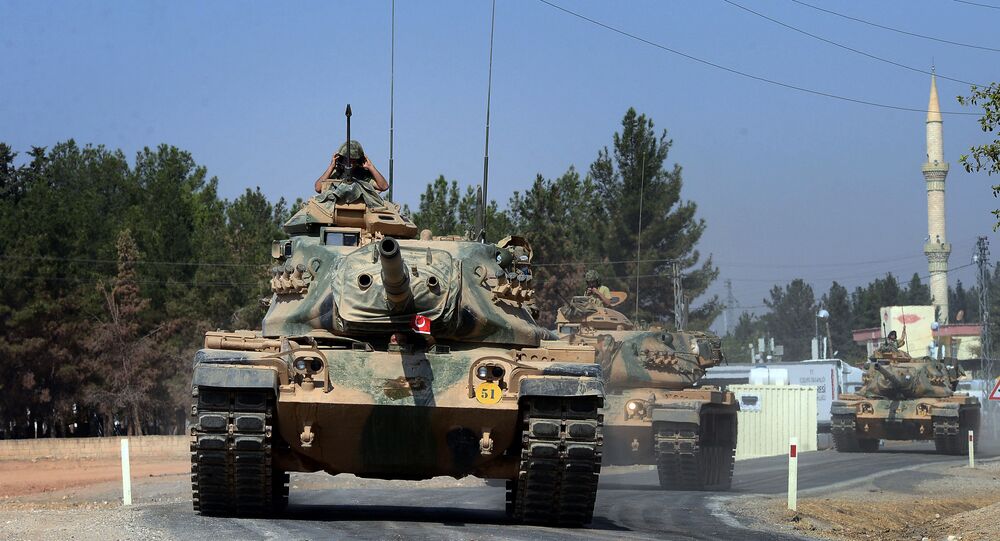 At least nine people, including six civilians were killed as a result of the Turkish airstrikes carried out on Saturday under the military operation in Syria's northwestern Afrin district, a source in Afrin's local authorities told Sputnik on Sunday.

Meanwhile, the former co-chairman of Syria's Kurdish Democratic Union Party (PYD) on Sunday called on everyone supporting the humanitarian values, as well as freedom to show solidarity with the people of the Syrian Afrin, where Ankara has launched a military operation.

© AP Photo / Burhan Ozbilici, File
Turkish City Reyhanli Hit by Rocket Attack From Afrin: 1 Killed, 32 Wounded
The politician added that he was sure that the Kurds would secure the victory in the conflict.

According to Muslim, the ongoing operation is "a kind of revenge by the Turkish government" as the Kurds have defeated the Daesh terrorist group in a number of Syrian regions and liberated such cities as Raqqa.

"Iran closely follows the ongoing developments in the Syrian city of Afrin, and hopes that this operation will end immediately to prevent the deepening of the crisis in the border regions of Turkey and Syria," Qassemi said in a statement released by the Tasnim news agency.

The Iranian diplomat added that Tehran expected Ankara to protect the territorial integrity of Syria and to avoid the escalation of crisis in the Middle Eastern nation.

On Saturday, Ankara launched an operation against the Kurdish forces in Afrin. The operation started at 14:00 GMT and a total of 72 Turkish aircraft conducted airstrikes in the district. On Sunday, Turkish Prime Minister Binali Yildirim confirmed the start of the ground operation in the region.

The operation Olive Branch launched by Ankara has been strongly criticized by Damascus, while a number of other states, such as Germany expressed concerns over the developments in the region.