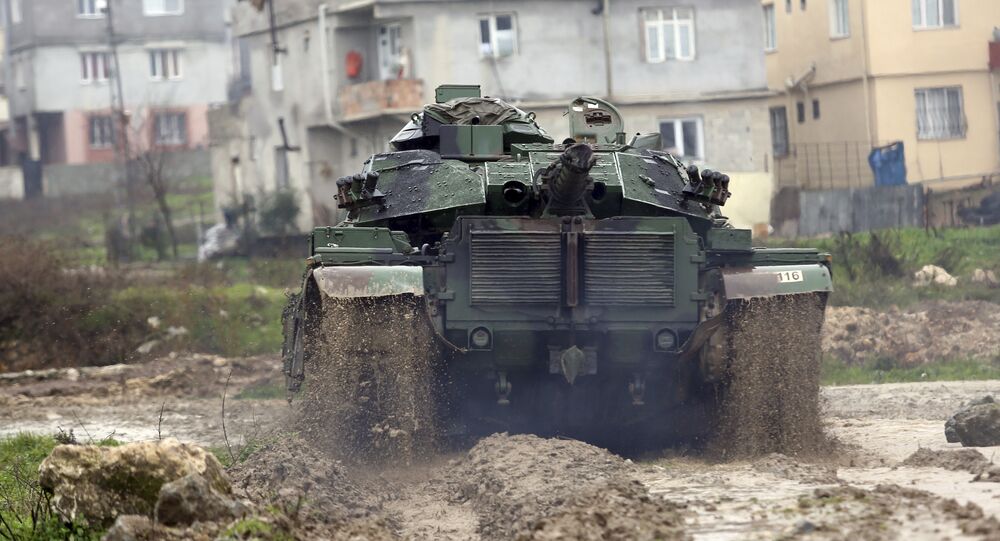 "The operation in Afrin started at 11:05 local time [08:05 GMT]," Yildirim was quoted as saying by the broadcaster.

Everyone, who tried to support Kurds in Afrin, would become targets of the Turkish Air Force too, the minister said, adding that a 30-kilometer safe zone would be created during the operation of the Turkish military.

According to Yildirim, Ankara maintains contacts with Damascus over its operation in Afrin through Russia's mediation.

"We are communicating with the Syrian government through Moscow's mediation. The Free Syrian Army together with our units has entered Afrin. Russia has no objections regarding the operation. Iran's concerns are now being settled," Yildirim was quoted as saying by the broadcaster.

The minister further noted that two people were injured as result of a shelling of Turkish city of Kilis by Syrian Kurds.

© AP Photo / Halit Onur Sandal
Turkey's Land Forces to Carry Out 'Necessary Activities' in Syria on Sunday, Depending on Developments - PM
The announcement comes a day after the Turkish General Staff declared the launch of the operation dubbed Olive Branch against the Kurdish forces in Afrin. The operation started at 14:00 GMT and over 70 Turkish warplanes conducted airstrikes in seven districts of Afrin, where 108 targets out of 113 were destroyed. The military operation has already been condemned by Damascus with the Syrian Foreign Ministry calling the act a violation of Syrian sovereignty.
...
Reddit
Google+
Blogger
Pinterest
StumbleUpon
Telegram
WhatsApp
1810
Topic:
Turkey Starts Operation 'Olive Branch' in Syria (60)

WATCH the Beginning of Turkey's Military Operation in Northern Syria