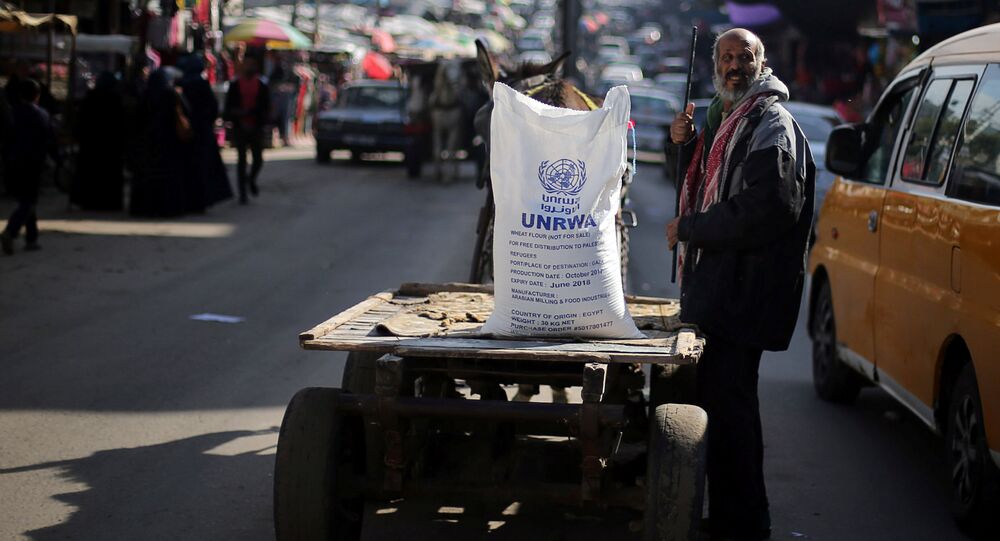 The UN Relief and Welfare Agency (UNRWA) is launching an international campaign to raise funds to aid Palestinian refugees after the US cut its funding by half. Sputnik Arabic spoke with UNRWA information advisor Adnan Abu Hasnah about the impact of this cut.

The US has been the UNRWA’s biggest donor in recent decades. A recent cut in US funding will affect regional security and could put vital health, educational and food services at risk, its chief said on Wednesday.

"The amount of $65 million is small, but it covers the cost of maintaining schools and food for 1 million refugees in the Gaza Strip. The people there live in very difficult situations as there is not enough drinking water, fuel, and there are constant interruptions with electricity. As a result, people are very dependent on our agency, which helps them to live normally,” the information advisor of UNRWA told Sputnik.

© AP Photo / UNRWA
Hamas Calls Trump’s Threats to Stop Funding UNRWA ‘Political Extortion’
He went on to say that in the coming days, the organization will launch an international campaign to attract new donors, and these can be countries, organizations or individuals.

According to Hasnah, this campaign is aimed at preserving the agency so that it continues its humanitarian mission.

“At the same time, we persistently urge the United States to resume its assistance for UNRWA,” Hasnah said.

Washington announced that it would provide $60 million to the agency while withholding a further $65 million for now. The US State Department said that UNRWA needed to make unspecified reforms.

UNRWA Commissioner-General Pierre Krähenbühl said he would request other donor nations to contribute and start “a global fundraising campaign” aimed at keeping the agency’s schools and clinics for refugees open through 2018.

“At stake is the dignity and human security of millions of Palestine refugees, in need of emergency food assistance and other support in Jordan, Lebanon, Syria, and the West Bank and Gaza Strip,” he said in a statement, Reuters reported.

There are two million people living in the Gaza Strip, where over one million people are dependent on the funds they receive from UNRWA and other humanitarian agencies.

International NGO’s condemned the cut in the US funding. Kenneth Roth, executive director of Human Rights Watch, said in a Twitter post on Tuesday that Washington was "holding Palestinian kids' humanitarian needs hostage to political agendas".