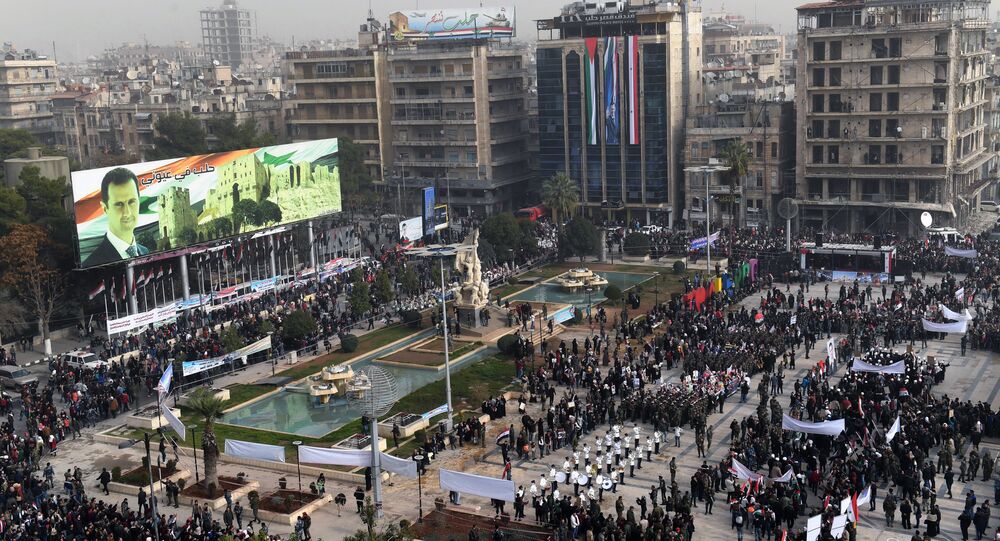 Sputnik spoke to former UK ambassador to Syria, Peter Ford, to ask whether any further US involvement in the Syrian conflict is only likely to exacerbate division in the country, thus perpetuating the war.

US Secretary of State Rex Tillerson suggested on Wednesday that the Trump administration would be taking on an open-ended military commitment to Syria as part of a stated strategy to prevent the regrowth of Daesh and to forge a new 'solution' that hopes to remove Syrian President Bashar al-Assad removed from power.

Sputnik: The US — under both the Obama and Trump administrations — has long framed its objective in Syria rather narrowly to the defeat of Daesh. Now that the terrorist group's so-called caliphate is effectively gone, and there are forces in the country — such as the Syrian Arab Army — capable of destroying any possible Daesh resurgence, why does the US need to remain?

Peter Ford: Well it doesn't is the simple and obvious truth. In its own eyes, it needs to remain because Trump is being accused of having lost Syria to the Russians. This is, quite simply, now a power play by the US to show that it still has influence in Syria and the wider Middle East, and it's part of the US power game against Iran. It has nothing to do with removing terrorism from Syria, nothing to do with humanitarian issues, nothing to do with democracy in Syria. It's quite simply arm wrestling that the United States wishes to engage in with Russia or any other power that dares to question, in the slightest way, American pre-eminence in the world.

Sputnik: How do you see the potential long-term presence of US forces in the country hindering any effort to reunify Syria in the future?

Peter Ford: This appears to be part of the US plan: precisely to prevent Syria being stabilized as a unitary sovereign state. It has been a long-term goal of the United States going back at least forty years, and now they see a way of partially implementing it: encouraging the formation of a Kurdish statelet in the north and northeast. There is no way that this can help to stabilize Syria. In fact, I would characterize the US policy — now openly more or less avowed by Tillerson — as the continuing destabilization of Syria. Given that America cannot impose its will in terms of regime change, it's settling for what it sees as the next best thing, which is to keep Syria constantly destabilized.

Sputnik: And finally, what does international law have to say about the US first of all even being in Syria, and secondly maintaining a presence there, uninvited by Damascus?

Peter Ford: What the Americans are doing is completely flouting international law. It is a gross breach of international law to maintain a presence on the territory of a member state of the United Nations, which has a seat in New York, which is recognized by most countries around the world. It is totally illegal to maintain a military presence without the express permission of the host government. But America plays by different rules. In the American playbook might is right for America. America is a scofflaw, an international scofflaw and has been in many instances, not only Syria.

The views and opinions expressed by Peter Ford do not necessarily reflect those of Sputnik.