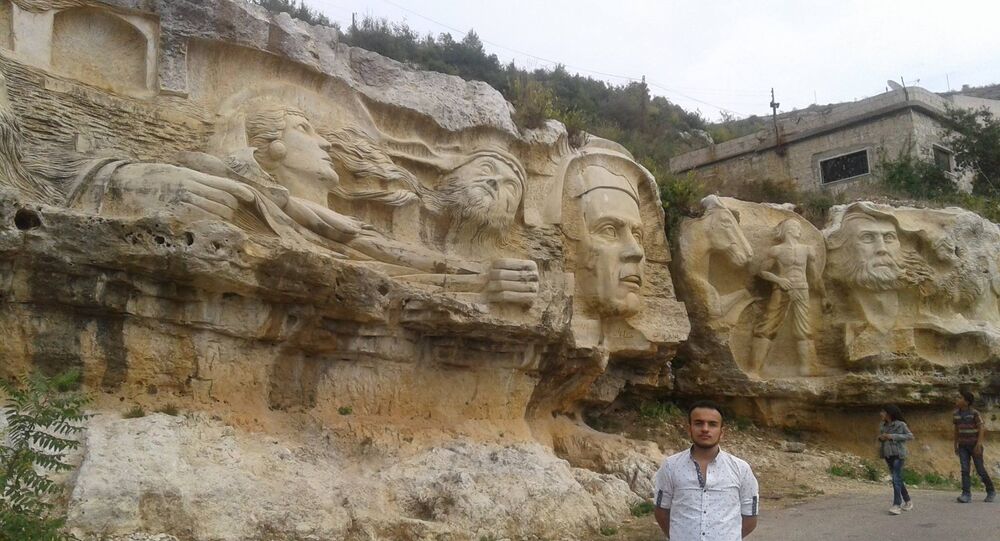 Commenting on a bas-relief he created in the western province of Tartus, Syrian sculptor Alaa Ali Muhammed told Sputnik that it took him at least five months to complete what is now believed to be the largest sculpture of its kind in the Arab world.

In an interview with Sputnik, Syrian sculptor Alaa Ali Muhammed explained that he started preparations for work on the bas-relief back in 2007, when the grandson of "the just and beloved judge" Khalil Ahmed al-Khatib asked Ali Muhammed to capture his valorous ancestor in stone.

"That man took an active part in the struggle against the French occupation [related to the 1920 Franco-Syrian war. The French executed Al-Khatib for helping Syrian rebels hide their weapons stacks. We decided to carve his portrait right in the center of the [sculpture] composition," Ali Muhammed said.

He added that the bas-relief's right and left sides contain Al-Khat's contemporaries, with women "symbolizing fertility, beauty, and the Motherland."

"Here's a rider holding his horse and looking toward the horizon. Also, you can see different symbols of our region on the bas-relief," Ali Muhammed noted.

He said that it took him at least five months "of working directly with the stone" and that locals already appreciate his work, coming to see the bas-relief and taking photos for their social networks.

The bas-relief emerged on the rocks in the Syrian town of Brummanet al-Mashayekh in the western province of Tartus on the Mediterranean coast.

The sculpture's width and height stand at 30 meters and about seven meters, respectively.