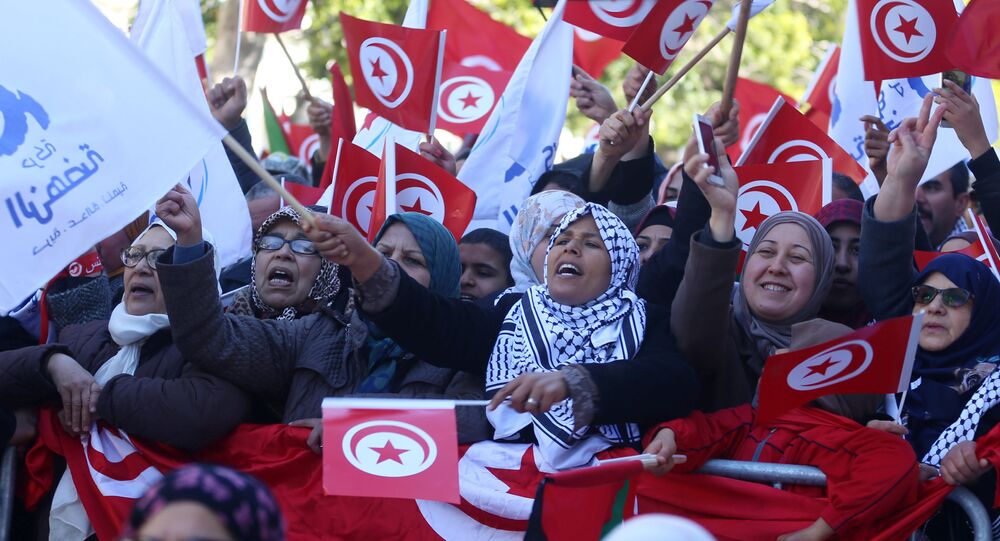 The demonstrations have continued throughout the week in the North African nation that was the first Arab state that saw its president toppled as a result of protests in 2011, marking the beginning of a series of popular uprisings which later swept across the Middle East.

Hundreds of people took to the streets of the Tunisian capital on Sunday that marked the seventh anniversary of the start of the Arab Spring. The demonstrators marched in protest of poverty and unemployment. They were reportedly chanting "Work, Freedom, Dignity" — slogans similar to those that could be heard across the country at the times when President Zine El Abidine Ben Ali was overthrown.

The rally was peaceful as the authorities moved to tighten the security measures ahead of the event, according to AFP.

The protesters reportedly responded to the call of the coalition of activist groups to rally against the austerity measures the government had taken to reduce the budget deficit.

Tunisians have been staging protests across the country for the whole last week in response to the government’s move to raise taxes and social security contributions. So far, 800 people have been arrested.

The January 14 is deemed to be the official date for the beginning of the revolt in Tunisia despite the fact the unrest had started in the country earlier. On December 17, 2010, Tunisian merchant Mohamed Bouazizi, set himself on fire in the city of Ben Arous, causing the events that were later called "Jasmine Revolution.”