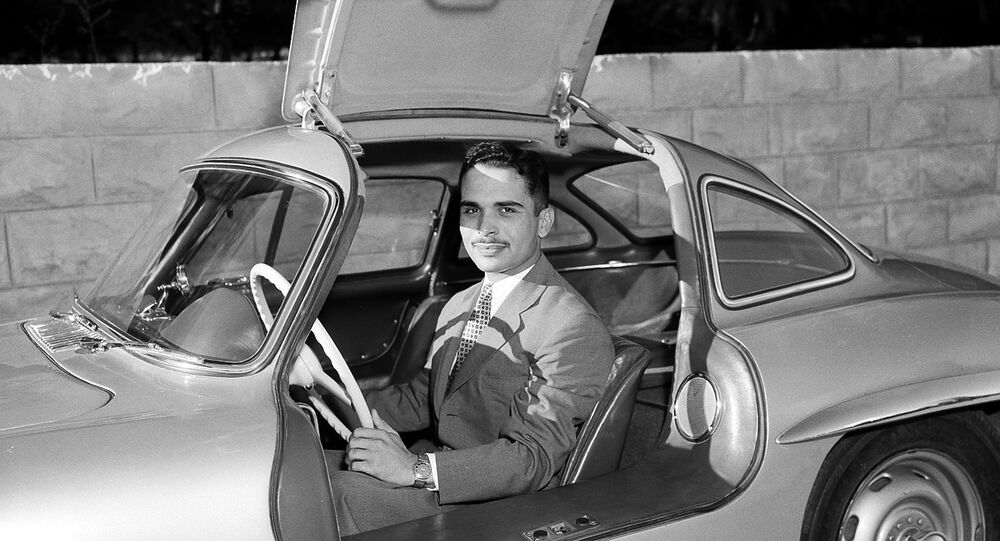 In a tale of forbidden love, secret princes, madness and murder that would be difficult to believe as the plot of an airport paperback, the CIA has declassified documents showing that King Hussein of Jordan had a child out of wedlock with an American Jewish actress - who was later killed by their own lovechild.

The three-page memo reveals that the then-24-year-old king's visit to the US in 1959 to strengthen ties with Washington ended up taking on a salacious tone. Hussein "was especially desirous of female companionship during his Los Angeles visit and it was requested that appropriate arrangements be made through a controlled source of the Office in order to assure a satisfied visit," the report reads.

The CIA was eager to please the monarch, so they arranged a meeting between Hussein and a struggling 32-year-old actress named Susan Cabot. The CIA informed Cabot that they wanted her to bed the young king after establishing a rapport with him at a party thrown by billionaire Edwin Pauley.

Cabot was hesitant at first, the memo stated. "The actress said that she rejected the proposal but finally went to [Hussein's] party," where she 'became quite taken with the foreign official and found him to be most charming."

A few days later, Hussein asked the CIA to arrange a second meeting between him and the actress. Hussein was desperate to keep his canoodling with a Jew secret, as he had not consolidated power in his home country and was worried that his political opponents could use it as ammunition against him.

So when American tabloids picked up the relationship, the CIA suppressed the story on Hussein's behalf, according to the memo. In 1961, Cabot gave birth to a son named Timothy — long rumored to be Hussein's lovechild, the illegitimate prince of the Kingdom of Jordan.

The Los Angeles Times reported that Timothy was born with a pituitary deficiency that meant he suffered from dwarfism. He grew to 5'4" after thrice-weekly hormone injections during puberty. Cabot married her second husband, Michael Roman, in 1968, and Timothy took his step-father's last name. The couple divorced in 1983.

Cabot suffered from depression and suicidal thoughts in her last years of life. On December 10, 1986, Timothy was arrested and charged with the second degree murder of his mother. Timothy initially claimed that a man had broken into their house and beaten Cabot to death.

At the trial, the LA Times claimed that Timothy revised his story to say that Susan, who didn't seem to recognize him, had attacked him and he had killed her in self-defense. He also testified that the drugs he took for his pituitary deficiency made him overly aggressive.

The court convicted Timothy of involuntary manslaughter and sentenced him to time served and three years probation. He died of heart failure in 2003.

The trial also revealed that for the last 25 years Cabot had received a monthly payment of $1,500 from the Jordanian government. "For better or worse, it looks like child support," one attorney quipped about the payments during the trial.

Hussein, who took the throne as a teenager in 1952, had already been married and divorced when he met Cabot. In 1961, he married an Englishwoman named Antoinette Gardiner. The king was married four times in total, producing 12 children across his unions before his death in 1999 from lymphatic cancer. His first son with Gardiner, Abdullah II, was born in 1962 and reigns as the current king of Jordan.