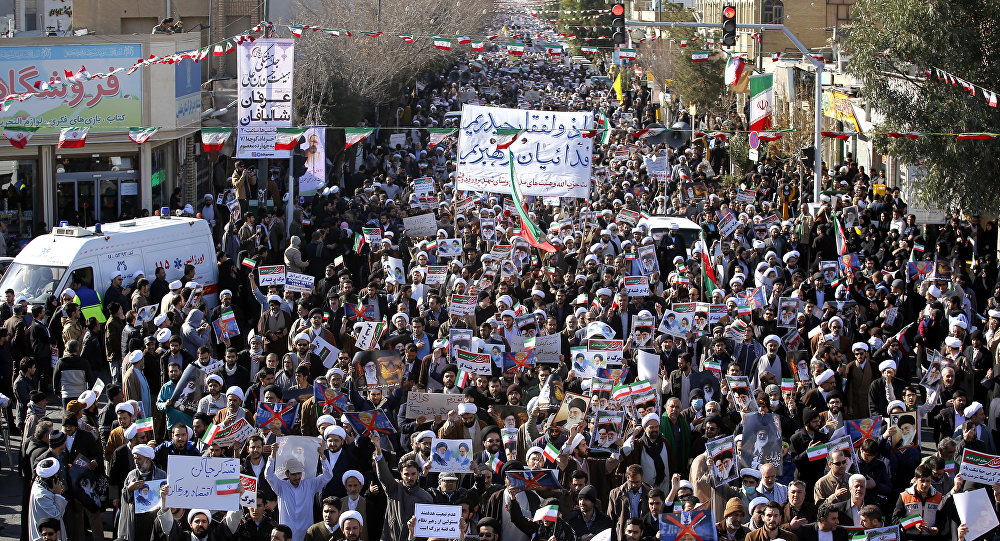 The head of Iran's Revolutionary Guards, Major General Mohammad Ali Jafari, has declared victory after several days of violent protests. Sputnik spoke to a political activist who said the protesters knew they had the support of the West.

Crowds have come out onto the streets of several Iranian cities on Thursday, January 4, in support of the government as protests have fizzled out.

During five days of unrest, which began on December 28, 21 people died amid protests against economic grievances.

Iran's Ambassador to the United Nations Gholam Ali Khoshroo, accused US President Donald Trump and his administration of intervening "in a grotesque way" in Iran's internal affairs.

Hanar Marouf, a political analyst and researcher at the Middle East Research Institute, said the demonstrators had been emboldened by the support from President Trump.

"The new generation is done with the current government and they seek change. If you notice the new generation, there are lots of pages on Facebook of Iranians taking off their hijab and walking on the streets taking pictures to challenge the government. It's a brave generation. Iran is very rich with culture and love for life," Ms. Marouf told Sputnik.

In 2009 demonstrators came onto the streets of Tehran to protest at what they claimed was a rigged poll which re-elected Mahmoud Ahmadinejad as Iran's President.

"This uprising has occurred again after 2009 because the younger generation knows that the international community is with them and supporting their cause with the strength of social media's support. Iranians are in the limelight," Ms. Marouf told Sputnik.

​​"Trump is very direct and on point when it comes to foreign policy, let alone when it comes to Iran. In one of his tweets with the coming of the New Year he sought regime change, which might has given the people courage…after the 2009 uprising failed," Ms. Marouf told Sputnik.

"[President Barack] Obama was intensively criticized for not taking a serious stance on the Iranians in 2009 as deaths escalated on the streets…now with Trump, it is very different as he keeps attacking the regime and asking for change and Rouhani has not seen such direct attacks before," she said.

​She said Trump and Iran were on a collision course because the US President has promised to move his country's embassy in Israel to Jerusalem while Iran has refused to stop funding Hamas.

"Iran is clearly showing its support to different groups in the Middle East, which raised the rage of the [Iranian] people after the economic struggle the country faced for years. Instead of spending millions in Yemen, Palestine, Lebanon and Iraq, Iranians have the right of civil development and improvement," she told Sputnik.

​Pro-Government Crowds on the Streets

Large crowds marched in support of the government in Isfahan, Ardebil, Mashhad and several other cities on Thursday.

"We are together behind the leader," chanted the crowds, in reference to Ayatollah Ali Khamenei.

General Mohammad Ali Jafari, the head of Iran's powerful Revolutionary Guards, said the "sedition" was over.

"The revolutionary Iranian people have responded in time to the enemies and trouble-makers by coming out on the streets. The people's main demand now is for the government and officials to deal with the economic problems," said Ali Akbar Velayati, an adviser to Ayatollah Khamenei.

Concerning the current situation in #Iran, as President @HassanRouhani has himself said recently, citizens must have the right to express their concerns.
The best way for a country to meet and overcome legitimate challenges is through peaceful means and dialogue.