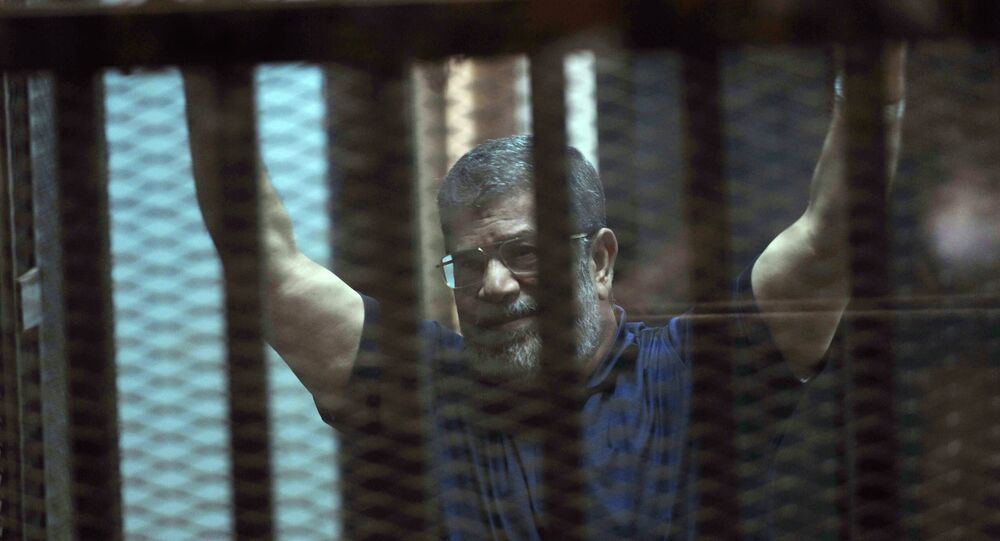 The legal proceedings started in May 2015. According to prosecutors, Morsi and his supporters repeatedly insulted judges in public. The former president, particularly, accused a judge of a fraud.

In addition to the imprisonment, Morsi was fined $56,000 as a compensation for moral damage suffered by one of the judges, the Al Ahram newspaper reported.

An Egyptian court on Saturday has sentenced the ousted president #MohamedMorsi to three years in jail over insulting judiciary. pic.twitter.com/CUQoGAkBYK

​Morsi won the presidential election in Egypt in 2012 to become the first democratically elected president of the country. The following year, he was ousted by the Egyptian military after large anti-government protests against him and Muslim Brotherhood movement.

© AP Photo / Khalil Hamra
Egypt's Former PM Detained in UAE, Set to Be Deported to Cairo - Reports
The former president then was sentenced to death in June 2015, for a mass jailbreak during the uprising in 2011. In November 2016, Egyptian Court of Cassation overturned the life sentence and ordered a retrial. Nevertheless, Morsi was sentenced to life imprisonment by an Egyptian court in September 2017 for passing army and state security secrets to Qatar in order to weaken the Egyptian state and espionage in favor of Hamas and Hezbollah. He is also serving a 20-year sentence for allowing the killing of protesters during demonstrations in 2012.
...
Reddit
Google+
Blogger
Pinterest
StumbleUpon
Telegram
WhatsApp
51

EXCLUSIVE: Egypt Blast: 'They Competed With Each Other to Kill More People'