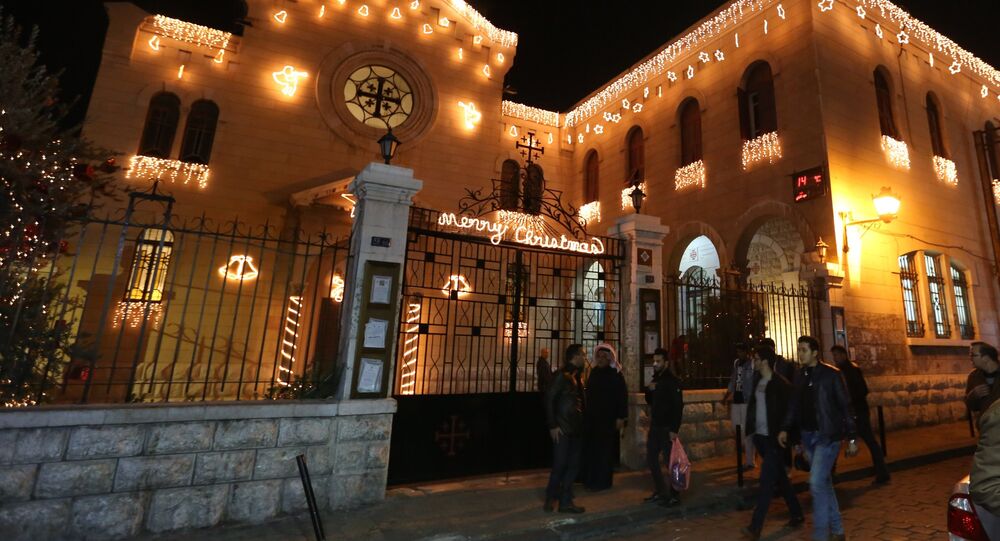 DAMASCUS (Sputnik) – Christians and members of other confessions are holding large-scale Christmas celebrations in Damascus and the nearby Christian towns of Maaloula and Sednayah despite the ongoing civil strife in the country.

It is not easy for a foreigner to arrive in Maaloula, because the ancient Orthodox city is located in the militarized zone around 30 miles from Damascus.

However, after learning that some Russians are going for a morning church service, a security officer allowed our car in without asking for any special documents.

Maaloula has been a well-known town in the Christian world. However, after it was seized by the Jabhat Nusra terror group (banned in Russia) in 2013, it has become known worldwide. That year nuns and the local convent's mother superior Pelagia was taken hostage by the militants. Abbas Ibrahim, Lebanon’s Security Service director, played a major role in freeing them.

The town was recaptured from the terrorists in spring 2014, however the militants had managed to destroy homes and the convent, plundered churches and exploded major Christian relics.

On the Christmas eve, dozens of children and their parents are traditionally going to Maaloula’s convent. After the service, the children will be presented Christmas gifts.

The prayers are held in the restored church in the Convent of Saint Thecla. Children with candles in their hands are singing church songs in Arabic and Aramaic languages. The indigenous people of Maaloula do not use the language spoken by Jesus solely within the church walls. The old-timers also continue to speak it among themselves.

The city now looks empty. Out of the 20,000 people who had fled it after the terrorists’ invasion, only a little more than 1,000 have returned back.

"The monastery is being restored, as well as all of Maaloula and the life that was going on there for centuries. We have restored the church, where our main relic is located. We have managed to return the stolen bells. Russia has helped us a lot. And even now, the Russians are restoring a number of icons important to us," local priest Elias said, trying to contain a crowd of children wishing to receive their Christmas gift.

A boy Butrus, 15, told us that the Christmas celebrations in the monastery were held like before the war for the first time in six years.

"We are all waiting for the evening – we will meet again here, we will sing Christmas carols, light candles, and then go for a walk with friends. It is my favorite holiday," the boy said.

The monastery has changed much over the past three years. A lot of historic relics, from icons to a massive old entrance door and the bells, was purchased from smugglers through Lebanese intermediaries. Funds for this have been donated by Christians from across the Arab world and beyond.

READ MORE: 10 Most Bizarre Christmas Traditions Around the World

During our first visit to Maaloula in spring 2014, an icon of Saint Thecla was accidentally found in the piles of ashes and debris. It was only slightly affected by the barbaric actions of terrorists. Today, the icon is kept in the Beirut office of the International Information Agency Rossiya Segodnya after the blessing of the Maaloula monastery’s abbot.

"I remember, the abbot gave you the icon when you came to us for the first time. Now I will take you to the main shrine of our monastery, there is the same icon is located. But it is the real icon, the one that the militants were looking for," father Elias said, guiding us to a small cell above the monastery, where at present, only icons of the Virgin and the Christ with carved-out faces are reminding of war.

As we are leaving the church and going to the central square, the children, wearing red hats, are scattering along the narrow streets of Maaloula.

Sami, one of the few natives of Maaloula, noticed the visitors at the square. Sami has returned to the town after it had been liberated from the terrorists.

"The militants have very much destroyed our town. The majority of citizens still have not returned. Many are not in Syria. I have cousins, one of them is Canada and one, who studied in Bulgaria in the Soviet period, is there now," Sami said.

The man, who does not have his own family, is living with his sister and mother, who turned 94 this year.

Sami invited us to his house. As he was guiding us there, he was telling us about the everyday life in the old part of the city.

The houses are built wall to wall in the narrow streets of Maaloula. According to the local rules, the external wall must be lined with stone, while ceiling and partitions must be made of wood.

© AP Photo / Ng Han Guan
Intervention Against Christmas Needed to Preserve Chinese Cultural Identity - Professors
There are a lot of abandoned houses in the streets. Some buildings have belonged to Muslim families who supported the rebels and are hiding now as they are afraid to return home.

The restoration of the town continues on Christmas morning. Sami explains that one of the UN agencies committed to rebuild infrastructure in Maaloula, and has already connected the old part of the city to electricity and the telephone network.

The friendly Syrian is living in a small house in the beginning of the street, where he led the guests for tasting wine he had produced. Sami’s house is quite frugal. The man lives with his sister and mother in a large room, separated into a living room and a bedroom with kitchen by a curtain.

"Our house is made in line with all the traditions of Maaloula. There is the second floor with windows for the family, and downstairs, there is a room for cattle and a room where wine is kept," Sami says, taking a bottle of ruby wine in his hands.

Sami has a family-run vineyard in the hills above the town. According to the farmer, Maaloula’s wine is special, due to the special sort of wine which is grown there.

"This year we will not have a big Christmas celebration. A little wine, hummus and tabbouleh [national parsley salad]. We decided to support the neighbors. Last week, the head of their family died," Sami’s sister said while cooking.

We are saying goodbye to Sami and his family, hugging and wishing each other merry Christmas, like good old friends. Syrian hospitality has not even been destroyed by war.

Sednayah is located high in the mountains on the way from Maaloula to Damascus. The famous Our Lady of Saidnaya Monastery, as well as dozens of small churches are is located in the city and hills around it.

The militants tried several times to occupy the heights above the city, however local residents mobilized quickly to protect the Orthodox settlements. They defended the heights and did not allow the militants to approach the city.

Local residents, as well as Orthodox and Catholic Christians from Damascus and Homs, have been coming in flocks to the monastery in the evening.

This year, for the first time in seven years, a Christmas tree of almost 100 feet and a traditional Christmas cave, the longest in the Arab world, were installed in the city. Over one and a half months, the local residents have been decorating the cave with lights and figures.

"Last week, three days before the opening, the cave was completely burned, can you imagine this? Something went wrong with electricity," the local guard Mark said.

Mark noted with pride that the cave was eventually open on time thanks to almost 200 volunteers who had been restoring the Christmas installation without rest for three days.

"As we celebrate Christmas, we celebrate the rebirth of our motherland. Our Syria rises from the ashes, we, the Orthodox Christians, defended our lands and traditions," Mark proudly says.

The man advised us also to visit the city’s main square where mass celebrations are going on. Children from church schools and activists of the Syrian Social Nationalist Party are decorating cars with balloons; young people, dressed in Santa Claus costumes, are ready for a car parade in the city.

Children are running along the streets in anticipation of holiday and their portions of sweets. Christmas carols, bringing joy and soothing the war-weary people, can be heard from many churches.

Not on My Watch! Man Shows What He Thinks About Buying Plastic Christmas Tree