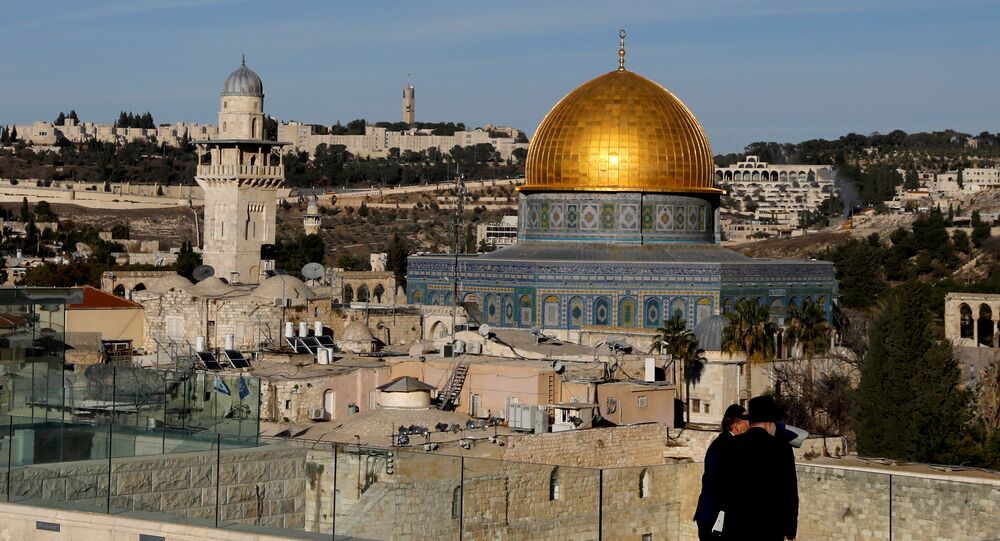 Guatemalan President Jimmy Morales has announced the decision to move the country's embassy in Israel to the disputed city of Jerusalem, following the similar US' ruling.

Palestine has slammed Guatemala's decision to transfer its embassy to the disputed city of Jerusalem as a "shameful and illegal act that goes totally against the wishes of church leaders" in the Holy City, as well as the UN General Assembly resolution.

According to Palestinian Foreign Minister Riyad al-Maliki as quoted by Wafa news agency, "This announcement is also a brazen act of disrespect and disregard to the collective positions of international alliances and groups Guatemala is part of, including the Non-aligned Movement."

Malki stressed that Morales’ move reflected his commitment to dragging Guatemala to the wrong side of history, while reiterating Pope Francis’ call to refrain from unilateral measures changing the historical status quo of Jerusalem.

In his turn, Israeli Prime Minister Benjamin Netanyahu has praised the move during a weekly meeting of his Likud party in parliament.

Guatemala, as well as neighboring Honduras, were two of the nine countries that voted against the latest UN resolution, rejecting the United States' decision to recognize Jerusalem as the Israeli capital and demanding that all the states not recognize any actions or measures that contradict the relevant resolutions of the UN body.

READ MORE: Guatemala to Relocate Its Embassy in Israel Following US Jerusalem Stunt

The resolution has prompted a harsh response of the Israeli side, which refused to accept it, with Netanyahu insisting that Jerusalem "always was, always will be" the country's capital and noting that many countries supported the Jewish state.

The vote was carried out in the wake of US President Donald Trump's decision on December 6 to relocate its embassy from Tel Aviv to Jerusalem, thus recognizing Israel's right to the disputed area as legal, despite mass outrage across the Arab world, triggering an escalation of the Israeli-Palestinian conflict, with Hamas, the Palestinian Islamic fundamentalist organization, announcing the beginning of the third "intifada."

However, commenting on Guatemala's decision to Army Radio, Israel's Ambassador Matty Cohen has stated that no official date for the embassy relocation had been set yet, noting that "it will happen after" the US proceeds. According to Washington, this could take about two years.

On the threshold of the UNGA vote, US Ambassador to the United Nations Nikki Haley had stated that Washington, the largest contributor to the international body, would remember the voting day, with Trump threatening to withhold US aid to countries that voted in favor, but stopping short of warning that the country's contributions to the United Nations itself would also be at stake.

Before 1980, when the Israeli Parliament had approved the Jerusalem Law, proclaiming the entire city Israel's undivided capital, Guatemala, as well as Bolivia, Chile, Colombia, Costa Rica, the Dominican Republic, Ecuador, El Salvador, Haiti, the Netherlands, Panama, Venezuela and Uruguay had their embassy in the disputed city.

After the adoption of the controversial law, the UN Security Council has issued a resolution urging the countries to move all their embassies to Tel Aviv.