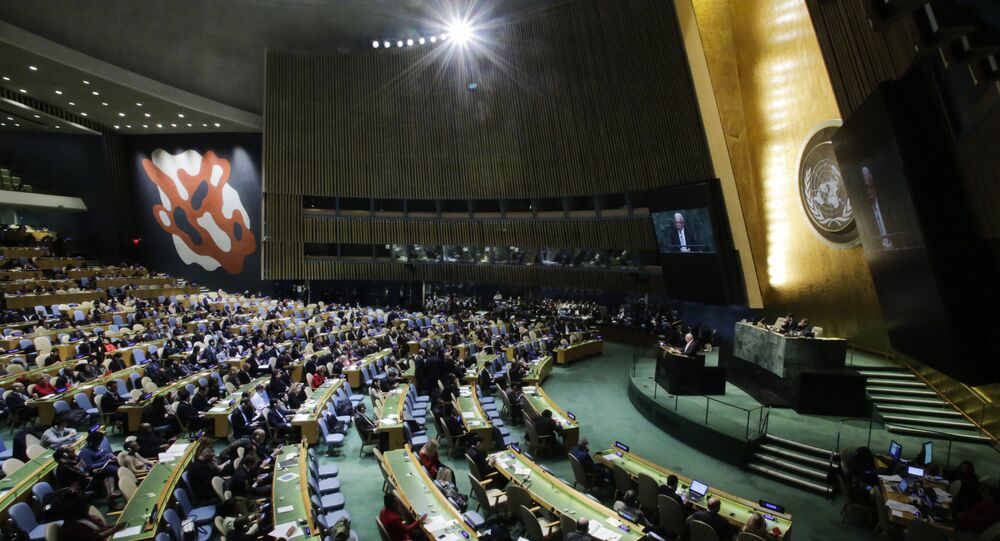 The UN General Assembly has approved a resolution that rejects US President Donald Trump's recognition of Jerusalem as the capital of Israel after 128 member states voted in favor of the move.

Nine countries voted against the resolution and 35 countries abstained. The resolution condemns both US recognition of Jerusalem as the capital of Israel as well as Washington's decision to move its embassy to the ancient city.

US Ambassador to the United Nations Nikki Haley said before the vote to those at the meeting that Washington, the largest contributor to the international body, will remember the voting day. President Donald Trump threatened to withhold US aid to countries that voted in favor of the General Assembly resolution but stopped short of warning that US contributions to the United Nations itself would also be at stake.

Prime Minister Benjamin Netanyahu's office said following the vote that Tel Aviv refuses to accept the UNGA's decision, but notes with satisfaction that many countries supported the Jewish state.

I do appreciate the fact that a growing number of countries refused to participate in this theater of the absurd. So I appreciate that, and especially I want to again express our thanks to @POTUS Trump and Ambassador Haley, for their stalwart defense of Israel and of the truth.

Israel completely rejects this preposterous resolution. Jerusalem is our capital. Always was, always will be. pic.twitter.com/0FcCtWJTvk

​Palestinian Leader: We Will Keep Fighting to Establish Palestinian State

Commenting on the UN's decision, Abu Rudeina, spokesman for Mahmoud Abbas, said Palestine enjoys the support of international community, and "no decisions made by any side could change the reality, that Jerusalem is an occupied territory under international law."

"We will continue our efforts at the United Nations and all international forums to put an end to this occupation and to establish our Palestinian state with East Jerusalem as its capital," Abu Rudeina added.

© REUTERS / Umit Bektas
Erdogan Says Trump Can't Buy Turkey's Will for UN Vote on Jerusalem
Trump announced his decision to recognize Jerusalem as the capital of Israel and ordered the Department of State to take steps to relocate the US Embassy from Tel Aviv to Jerusalem. The move has caused a backlash from the international community, with Palestinian officials calling it a provocation and President Trump's biggest mistake.

The Israeli-Palestinian conflict over Jerusalem dates back to 1967 when Israelis seized the eastern part of the city during the Six Day War. However, the international community does not recognize this annexation, calling the dispute one of the key obstacles on the path to peace in the region.