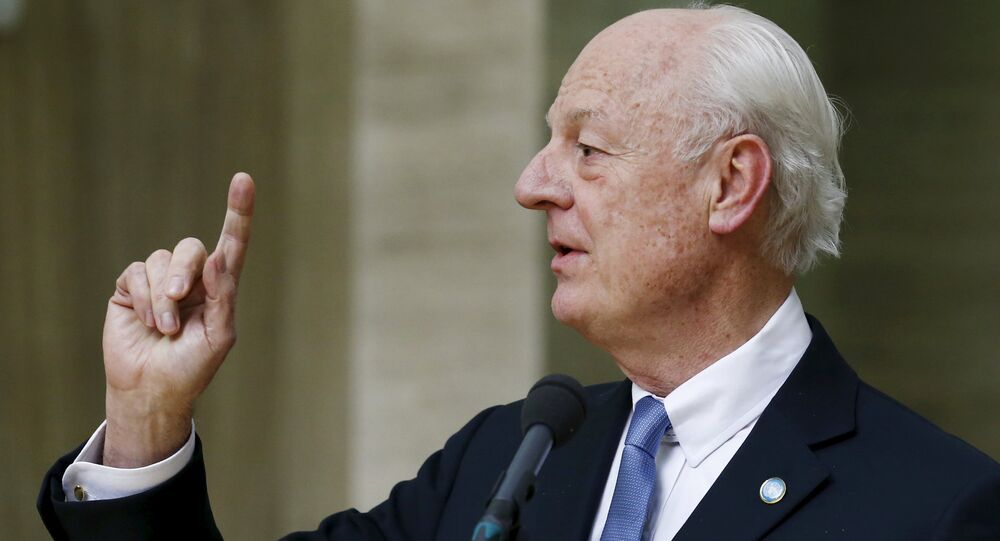 UN Special Envoy for Syria Staffan de Mistura expressed to the UN Security Council on Tuesday his concerns over the position of the Syrian government on terrorism, which postpones any discussion of future constitution or elections in the country indefinitely.

NEW YORK (Sputnik) — De Mistura addressed the UN Security Council to inform it about the results of the eighth round of the Geneva talks on Syria. The talks lasted from November 28 to December 14 and failed to bring any breakthrough in the negotiating process, as Damascus called the opposition's demand of President Bashar Assad's resignation unacceptable, while the opposition, in its turn, refused to change its demands.

"It [government delegation] also stated – actually using a video on YouTube – that until full Syrian sovereignty was restored and terrorism defeated in all parts of the Syrian territory, it was not possible to entertain real movement on a constitutional review process or elections. That to me was a new condition that I had never heard before, and it made me worried for any other initiative, in addition to Geneva, because if we have to wait all together until the whole country is in a different geographic and political environment, with no foreign or terrorist presence at all, that may mean that any type of intention to genuinely address constitutional review or election may now be put aside for a long period, if this position of the Government is confirmed – and it was confirmed to us," de Mistura said on Tuesday, briefing the UN Security Council on the results of the eighth round of Geneva talks.

UN Special Envoy for Syria also called on the United Nations to "provide specific elaborations" on the constitutional and electoral aspects of the Syrian settlement process.

"I believe the time has come for the UN to provide specific elaborations on the constitutional and electoral baskets (2 and 3) and how they relate to governance and counter-terrorism, security governance and confidence-building measures (1 and 4) and develop agreed and clear modalities for the full implementation of UNSCR 2254, and stimulate wider consultations as well," de Mistura told the UN Security Council.

© AFP 2020 / HO / ALBARAKA NEWS
US-Led Coalition Calls Allegations of Training Terrorists in Syria 'Absurd'
Staffan de Mistura stressed that any activities related to drafting of the Syrian constitution must be held as part of the intra-Syrian talks in Geneva under the UN auspices, UN Special Envoy for Syria Staffan de Mistura said on Tuesday.

As a result of the previous discussions on drafting and revising a new constitution, two institutions have been agreed upon, namely a Constitutional Commission and a National Conference, the official added.

"The Constitutional Commission could prepare and refer an initial draft of a new constitution to a National Conference in Syria, which could oversee a national dialogue and review, revise and then refer any draft constitution for popular approval – in accordance with [UNSC Resolution] 2254," he said.

© AP Photo / Hassan Ammar
Terrorism in Syria Exists With Western Support, Nusra Front is One of Main Issues - Assad
De Mistura also pointed out that mandate, terms of reference, powers, and rules of procedure of both institutions should be agreed upon by the Syrian sides during Geneva talks.

"The United Nations would ensure that any composition agreed would be consistent with [UNSC Resolution] 2254 and based upon any inclusive and objective selection criteria determined and agreed in Geneva," de Mistura noted.

In addition UN Special Envoy for Syria said that any entity established for a review of Syria’s constitution outside of the Middle Eastern country, should emerge directly from the UN-backed intra-Syrian talks in Geneva or should be supported by the United Nations.

"Bottom line, if any entity relevant to constitutional review, was to be established outside Syria, that is the line I have from the [UN] Secretary-General, and there was a desire for it to work under the aegis of the United Nations, it would either have to emerge directly from the intra-Syrian talks in Geneva or the United Nations would need to retain the prerogative to review such body," De Mistura told the UN Security Council.

The special envoy underlined that his position on such body would be guided by UN Secretary-General Antonio Guterres and by the UN Security Council Resolution 2254 on the crisis settlement in Syria.

© Sputnik / Michael Klimentyev
Analysts: Russia Saved Syria From Disintegration Instigated by US
UN Resolution 2254, adopted in 2015, sets out a political transition process for Syria, including plans for a new constitution and UN-supervised elections.

In November, De Mistura said that he was following any initiatives on the Syrian crisis settlement, including the Russia-promoted Syrian National Dialogue Congress in Sochi, but noted that they should back the Geneva process, because only the United Nations and Geneva had the mandate from the UN Security Council to hold detailed talks on the Syrian peace process.

The issue of the Syria's constitutional review is expected to be raised at the Russia-initiated Syrian National Dialogue Congress in the Russian Black Sea resort of Sochi. The event is set to take place in 2018, and to bring together a vast number of the opposition and pro-governmental forces, as well as representatives of all the ethnic and religious groups of Syria. Beside Syria's future constitution, the Congress is aimed at pushing forward the process of the political settlement in Syria, as well as parliamentary and presidential elections.

Meantime, the Syrian government is making efforts to counter the humanitarian crisis in the country, sparked by the activities of terrorist organizations, as well as by the Western economic sanctions, and seeks to intensify cooperation on the humanitarian issue with the International Federation of Red Cross and Red Crescent Societies (IFRC), Syrian President Bashar Assad said on Tuesday.

Earlier on in the day, Assad met with IFRC President Francesco Rocca.

"The economic sanctions imposed on the Syrian people led to an aggravation of the humanitarian crisis in Syria. Syria, and all its institutions, continues to do everything possible to alleviate the suffering of its citizens caused by crimes and inhuman practices of the terrorist groups. In particular, cooperation with the International Red Cross and Red Crescent Movement is being strengthened, " Assad said at the meeting with Rocca, as quoted by the presidential press service.

© Sputnik / Michael Klimentyev
Putin's 'Historic' Visit to Syria Draws Line Under Daesh Supremacy - Lawmaker
Syria has been in the state of civil war for over six years, with government forces fighting against both Syrian opposition groups and terrorist organizations. The country's civilian population is in dire need of assistance amid continuing fighting and subsequent humanitarian crisis. Multiple international organizations, including the Red Cross, and individual states provide aid for the residents of the war-affected areas.

According to the latest UN figures, there are 13,1 million people in need in the crisis-torn country, 6.1 million are internally displaced, while almost 3 million are living in a hard-to-reach besieged areas of Syria.