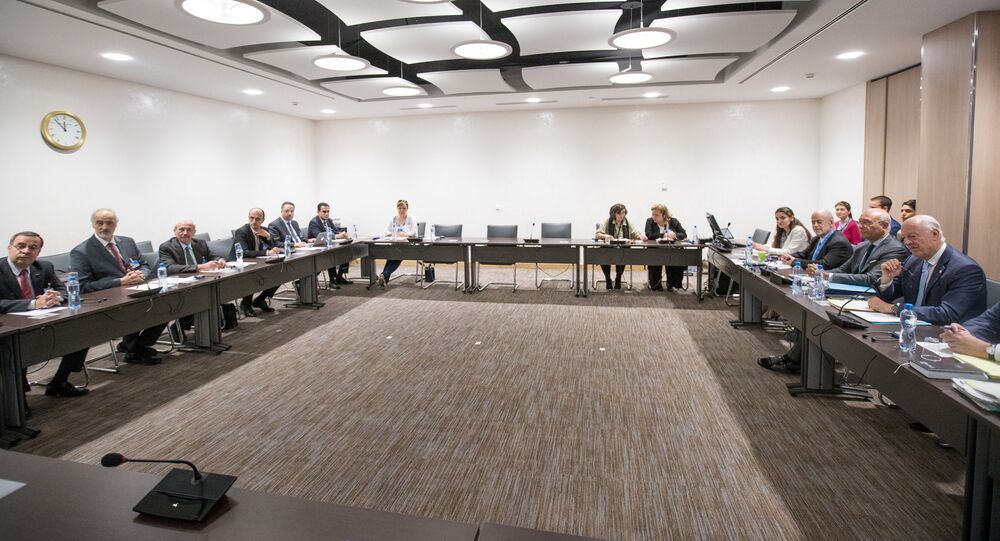 UN Special Envoy for Syria Staffan de Mistura has called the latest round of talks on Syrian settlement in Geneva a "big missed opportunity".

GENEVA (Sputnik) — UN Special Envoy for Syria Staffan de Mistura urged the conflicting sides to seek not only victory over Daesh terrorist group but also peace, describing the latest round of talks on Syrian settlement in Geneva a "big missed opportunity".

"I would conclude by saying… a big missed opportunity, a golden opportunity at the end of this year, when in fact there is a clear indication by many sides that military operations are coming to close. The Daesh territory has reduced close to zero, but at the same time everybody knows… that without a clear political process we risk to not have learned the lesson of Mosul and we risk to not have what should be winning the peace not only winning the war against Daesh," de Mistura said at a briefing on Thursday.

The UN Special Envoy said that Damascus delegation showed no desire to engage in direct talks with the Syrian opposition and had set a precondition by demanding to pressure the opposition delegation to withdraw Riyadh-2 communique.

"The government still insisted not wanting to meet the other side, the opposition… because they felt that I should be imposing on the opposition to withdraw the statement, which was done by someone else, not all of them, there were others in Riyadh too. That obviously was not a logical approach… because to me sounded again a precondition," de Mistura said at a briefing.

© AFP 2021 / ISNA / HOSSEIN HOSSEINZADEH
Iran Will Pull Out of Syria Immediately If Damascus Requests This – Analyst
In November, the delegations of Syria's opposition movements held a conference in the Saudi capital. As a result, an unified delegation was formed for participation in the eighth round of the Geneva settlement negotiations. The conference issued a final communique that was criticized by Damascus, as the Syrian authorities claimed that the document included preconditions, such as the requirement of President Bashar Assad departure.

The Syrian opposition has been engaged in talks on all four baskets of issues during the talks, while the government focused only on one basket, de Mistura said.

"We did have bilateral discussions with both parties. We had seven meetings with the government and 11 — with the opposition. The opposition, in particular, was engaged with us on all four baskets: governance, constitutional process, elections and countering terrorism… The government engaged with me only on terrorism," he said.

© AFP 2021 / FABRICE COFFRINI
De Mistura: Putin, Trump Created Qualitatively New Situation in Syrian Settlement
Yet, the Syrian unified opposition does not think that the ninth round of intra-Syrian talks in Geneva will be effective, according to delegation head Nasr Hariri.

Additionally, de Mistura announced plans to attend the next round of Astana talks to discuss the issue of detainees in Syria.

"I am planning to go to Astana at the request of the secretary general and at the invitation of the Kazakh authorities. One of the subjects that should be there and are on the agenda and I hope will be on the agenda and we will be insisting that… is the issue of detainees. Because it is affecting thousands and thousands of Syrians and the so-called missed people," de Mistura said at a briefing.