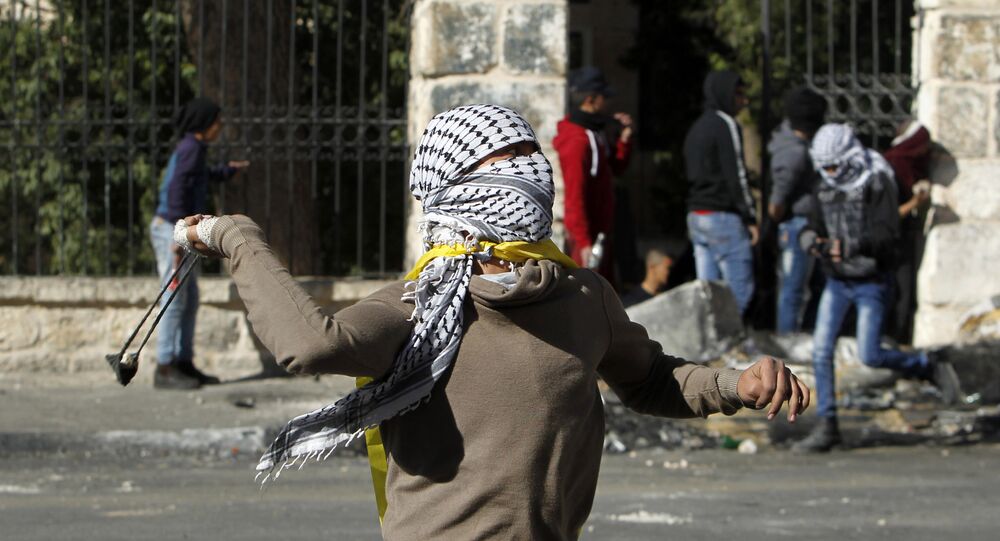 President Trump’s decision to recognize Jerusalem as Israel’s capital was criticized by many world leaders. The Palestinian people consider it to be the violation of the rights of the Palestinian people. This dissatisfaction evolves into the violent clashes.

BETHLEHEM (Sputnik) — Violence has erupted in Israel between the Israeli military and Palestinian youth in the Palestinian city of Bethlehem south of Jerusalem, a Sputnik correspondent reported from the scene Thursday. The clashes continues for about three hours.

Tweet: A Molotov cocktail attack against occupation soldiers during clashes in the northern city of Bethlehem today

Posters reading "Jerusalem is the eternal capital of Palestine" can be seen across the city as well as anti-Israel and anti-US caricatures and local residents believe that riots and protests against the US recent decision to recognize Jerusalem as Israeli capital will continue.

On December 6, US President Donald Trump announced his decision to recognize Jerusalem as the capital of Israel, forcing fierce criticism from many countries around the world, primarily by the Middle Eastern states.

The international community does not recognize the 1967 Six-Day War annexation of Jerusalem by Israel and considers the status of the city to be one of the core problems of the Middle East conflict, which should be resolved on the basis of an agreement with the Palestinians, which claim the eastern part of Jerusalem.

Gaza Militants ‘Ready’ for Truce After Deadly Clashes with Israel