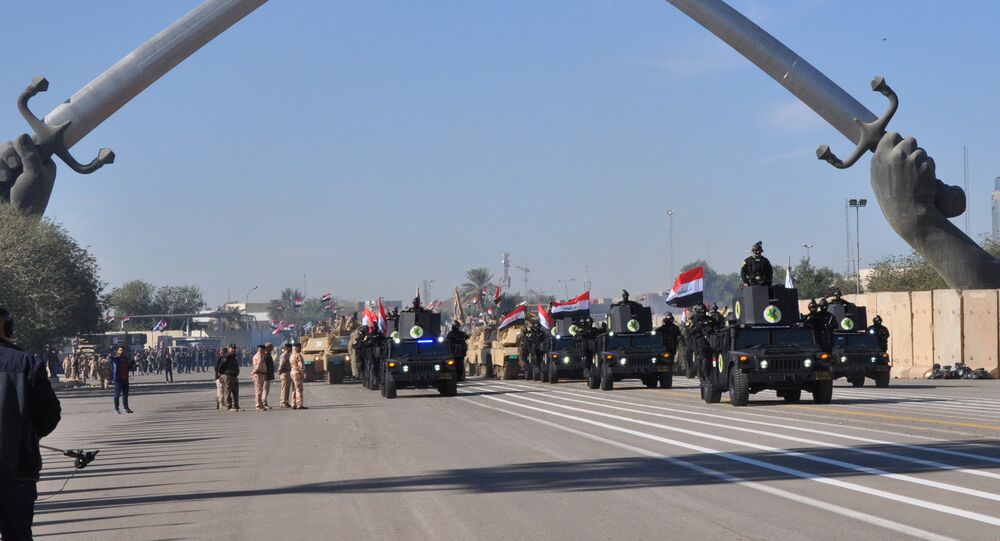 Iraq's Prime Minister Haider al-Abadi has announced the final victory over Daesh on December 9, following a years-long operation against the terrorists. However, the prime minister has omitted the Kurdish Peshmerga forces in his speech, evoking a wide-ranging response.

The Iraqi military parade to celebrate the final defeat of Daesh terror group (banned in Russia) has been held in Baghdad's Green Zone, with December 10 being declared as an annual national holiday by the country's Prime Minister Haider al-Abadi.

Only state media has been allowed to attend the event, while there has been no live broadcasts of the parade.

Fighter jets are reported to be flying over Baghdad's skies, with Iraqi helicopters flying over the capital on Saturday, carrying Iraqi flags as part of the preparations for the parade.

A military parade started in #Baghdad and the @IraqiPMO didn't invited #Peshmerga for celebrating victory.#العراق_تحرر_بالكامل#ISIS#البيشمركه#Iraq pic.twitter.com/wxGhlSaJYY

The Iraqi Army's victory over the terrorist group was declared on December 9 by the Iraqi Prime Minister Haider al-Abadi after the country's forces had gained complete control over the border with Syria. However, al-Abadi has failed to mention the Kurdish Peshmerga in his victory speech, which aroused swift condemnation from Kurdistan, according to the Rudaw Media Network report.

"Unfortunately, Mr. Abadi, once again failed to act as the prime minister and sidelined the role of the brave Peshmerga while the whole world witnessed that the Peshmerga, before all the armed forces of Iraq whom were named by Abadi, managed to defeat the myth of ISIS," the Peshmerga Ministry stated, as quoted by the media, adding that Daesh would have wreaked much more havoc on the country had the Peshmerga not halted the group's march across the country.

Families of the fallen heroes of our armed forces were present at today's victory parade in Baghdad. https://t.co/UncyzVmr5K

The Daesh terrorist group had kept Iraq under its control for several years, beginning in 2014, after seizing Mosul, the country's second-biggest city, and making it the terrorist group's so-called capital in Iraq, prompting the country's forces supported by the US-led coalition to launch an operation to free the territories a year later. In the summer of 2017, Iraqi forces regained control over the city, while later in November, over the town of Rawa, the last Daesh stronghold in the country.

This week marks another Daesh defeat in the Middle East, particularly in Syria, proclaimed by the Russian Chief of the General Staff after the government forces had cleared an area near the Euphrates River of terrorists.