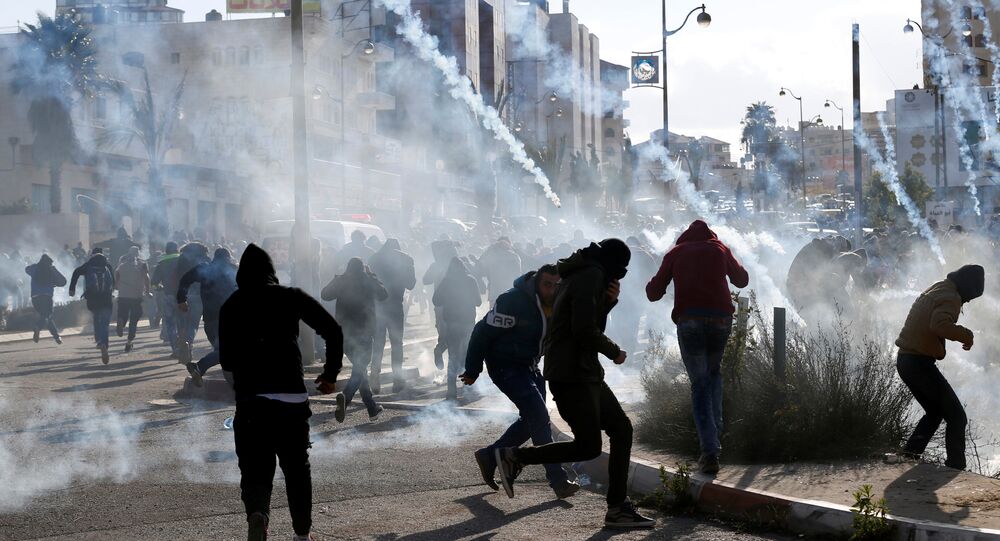 JERUSALEM (Sputnik) — The number of Palestinians injured in clashes with the Israeli police during Saturday’s protests against the US decision to recognize Jerusalem as the capital of Israel has reached some 230 people, the Palestine Red Crescent Society said in a press release.

#Photos of the continued clashes with #Israeli occupation forces in the occupied #Jerusalem and #WestBank this morning. #JerusalemIsTheCapitalOfPalestine pic.twitter.com/H9NKRR328d

© REUTERS / Ibraheem Abu Mustafa
'Death Sentence': World Leaders Slam Trump Over Reckless Jerusalem Stunt
The organization added that 12 people had been injured by live bullets, while 24 people had been wounded by rubber bullets and 172 more had suffered from tear gas.

Furthermore, four people were wounded as a result of the Israeli Defense Forces’ airstrikes, while injuries of 19 more people were placed in “others” category.

LIVE: THIS IS THE #WESTBANK U.S. recognition of #Jerusalem as #Israel Capital has protestors taking to the streets. #Palestine pic.twitter.com/TPrPWpWfVi..#FreePalestine #HandsOffAlQuds

Turkey has condemned the excessive use of force by Israel’s law enforcement agencies, the Turkish Foreign Ministry said in a statement.

“We feel deep regret and concern as 4 Palestinians lost their lives and hundreds were wounded in the occupied Palestinian territories as a result of the intervention of the Israeli forces to the Palestinians that were making protest demonstrations following the statement made in violation of the international law and all the relevant UN Resolutions on the status of Jerusalem. We strongly condemn the excessive use of force of Israel,” the statement issued on late Saturday said.

US President Donald Trump announced on Wednesday that the United States would recognize Jerusalem as the capital of Israel and signed the document on moving the US embassy from Tel Aviv to Jerusalem, which sparked negative reaction from many countries around the world, primarily in the Middle East.