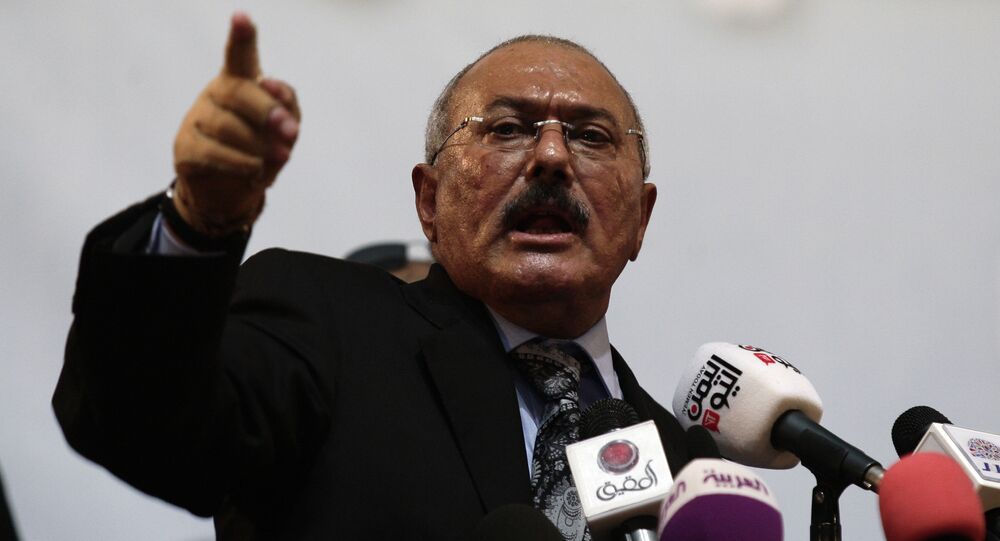 Photos and an extremely graphic video allegedly showing the corpse of Ali Abdullah Saleh has surfaced on social media, however, authenticity of the footage and the identity of the man are yet to be confirmed by the authorities.

Houthis' forces' representative Yahya al Mehdi has told Sputnik Arabic that former Yemeni President Ali Abdullah Saleh had been killed, confirming Iranian media Alalam reports. The head of a department of the Yemeni army, which is in alliance with the Houthis, Yahya al Mahdi has also confirmed to Sputnik the death of Saleh.

According to Yahya al Mahdi, Saleh was killed several several hours ago on the Sinhan-Maareb highway amid his secret movements through the country. A representative of the Yemeni troops loyal to the rebels, explained in a comment to Sputnik that the Houthis had been monitoring the movements of Saleh in order to detain him since Saturday, adding that the clashes between the rebels and the guards of Saleh started after an attempt to detain the former official.

The rumors of his death have been first denied by the Yemeni General People's Congress (Saleh's party) cited by Saudi media, who later confirmed the report after an unverified footage of Saleh's killing has emerged.

Previously, Reuters reported citing local residents that Houthi rebels had blown up the house of ex-President Saleh in Sanaa.

While the current whereabouts of Saleh reportedly remain unknown, the attack comes amid a six-day heavy fighting in the Yemeni capital between the forces loyal to the ex-president and the rebels.

In a Saturday speech, described by the Houthis as "deception," Saleh announced that he was ready to turn "a new page" in relations with the Saudi-led coalition, listing two demands.

Following the surprise breakdown of the alliance between Saleh and the rebels, the Saudi-led coalition welcomed Saleh's announcement and a day later allegedly bombed Houthi positions in the city, with no official confirmation of the airstrikes following so far.

At the same time, clashes between the former allies — the Houthis and supporters of former Yemeni president Ali Abdullah Saleh, have been ongoing in the southern districts of the Yemeni capital for already six days after an alleged attempt by the rebels to seize the city's main mosque.

© REUTERS / Mohamed al-Sayaghi
Yemen Civil War: The Impact of 986 Days of Conflict in Numbers
Amid the ongoing "street war" in Sanaa, the Houthis reportedly seized studios of the Yemen Today broadcaster, owned by Saleh, trapping some 20 employees inside over the weekend.

During his more than 30-year rule in Yemen, Saleh feuded and repeatedly fought with Ansar Allah. After his removal as a result of the "Arab Spring" in 2012, he took the side of the Houthis in an uprising against the new government, which began in 2014, when and his loyal military together with the Houthis formed a united front in the war against the government forces and the Saudi-led Arab coalition, which supported the government.