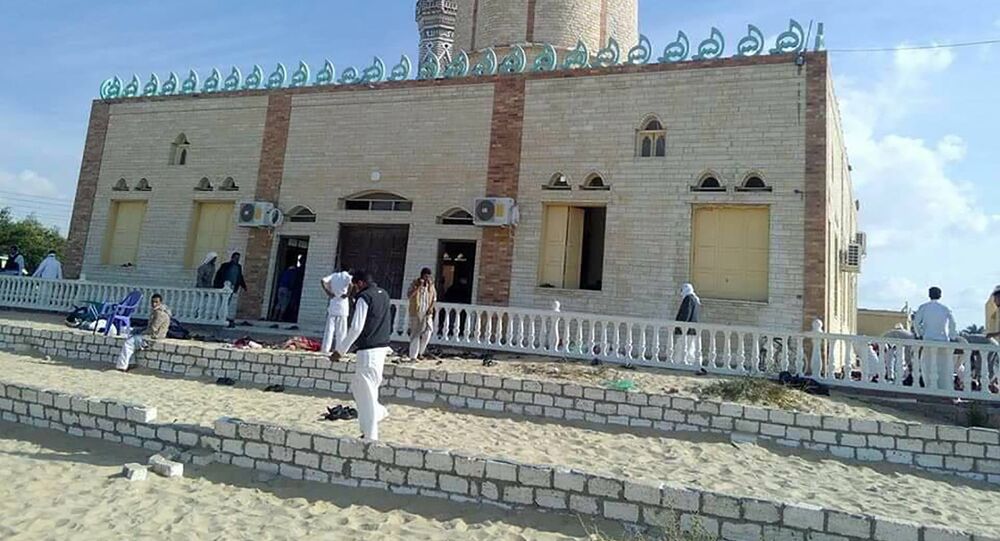 At least 235 have been killed in a mosque in Egypt's northern Sinai Peninsula amid an explosion and gunfire.

Egyptian drones have eliminated 15 militants who were involved in the terrorist attack in the Al Rawdah mosque, located to the west of the city of Arish in the northern Sinai Peninsula, Sky News Arabia reported, adding that the strikes have been carried out in a desert area near the scene of the deadly blast.

Following the attack, President Abdel Fattah al-Sisi has vowed to respond with "brutal force" against militants, adding that "the army and police will avenge our martyrs and return security and stability with force in the coming short period."

"Egypt is fighting terrorism for the whole region, for the whole world. That is why what is happening is an attempt to stop our anti-terror efforts, an attempt to break our will aimed at foiling the terrible criminal plan aimed at destruction of what remains of our region," Sisi stated.

According to a Sputnik source in the Egyptian security forces, "all the forces of the whole northern Sinai Peninsula have been mobilized in search of the attackers."

"The armed forces are engaged in searching people, who have attacked the Rawda mosque. All the ways leading to the area have been blocked, at the moment the mopping-up operation is in progress in the village, as well as in all neighboring settlements," the source said, adding that the checkpoints had been strengthened.

The explosion, followed by gunfire, reportedly killed at least 235 people during Friday prayers, with over hundreds others being injured, while the death toll continues to rise.

Previously it has been reported that Egyptian law enforcement foces have been searching for the perpetrators of the attack, while no group has so far claimed responsibility for the bombing.

Egypt has been fighting a jihadist insurgency in the northern Sinai Peninsula since the army overthrew then-President Mohamed Morsi in 2013, when local militants pledged allegiance to Daesh terrorist group in 2014 and have claimed responsibility for a number of deadly attacks in the region since then.