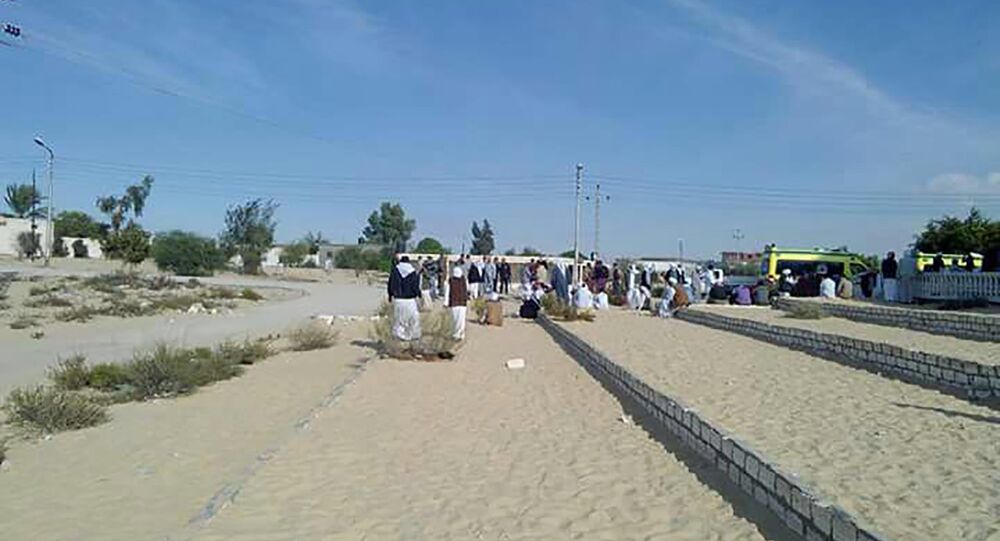 The attack struck the mosque during Friday prayers. Egypt has been fighting jihadist militants in the northern Sinai Peninsula since they had pledged allegiance to Daesh in 2014.

While the death toll may further rise, Egypt's Health Ministry official data previously suggested that at least 75 people were killed or injured in the attack in the mosque, which used to be attended by hundreds.

#UPDATE: Images from the scene more than 75 dead and hundreds wounded after explosion at mosque in Al-Arish #Sinai #Egypt pic.twitter.com/KzBxxZQfH2

While there have been conflicting reports on the number of casualties, there may be up to 150 injured in the blast.

​WARNING: The following photos are graphic and may offend sensibilities

According to Sky News Arabia, the explosion that took place during Friday's prayers has been followed by gunfire, with the Health Ministry sending dozens of ambulances to the scene.

Following the incident, a source in the province's security service told Sputnik that radical militants, who settled in northern Sinai peninsula in Egypt, have threatened representatives of the Sufism trend of Islam.

"This mosque belongs to the Sufi Tariqa of Gargariya. There have been no concrete threats against the mosque since all dwellers of the village are praying here, but there were threats against the Sufis. The Sufi ideology contradicts the extremists' views," the source said.

According to an Egyptian lawmaker, the terrorists were masked and surrounded the mosque during prayers, then they entered the building, with a number of militants wearing explosive belts.

The Egyptian security forces have cordoned off the site of the explosion. Egyptian President Sisi is reportedly set to hold a top-level emergency security meeting, while the authorities have declared a three-day mourning over the attack.

The Egyptian Prosecutor General's Office has launched an investigation into the attack, while the law enforcement forces are searching for the perpetrators.

No group has claimed responsibility for the attack yet, however, Egypt has been fighting a jihadist insurgency in the northern Sinai Peninsula since the army overthrew then-President Mohamed Morsi in 2013. The militants on the Sinai pledged allegiance to Daesh terrorist group in 2014, and have claimed responsibility for a number of deadly attacks in the region since then.