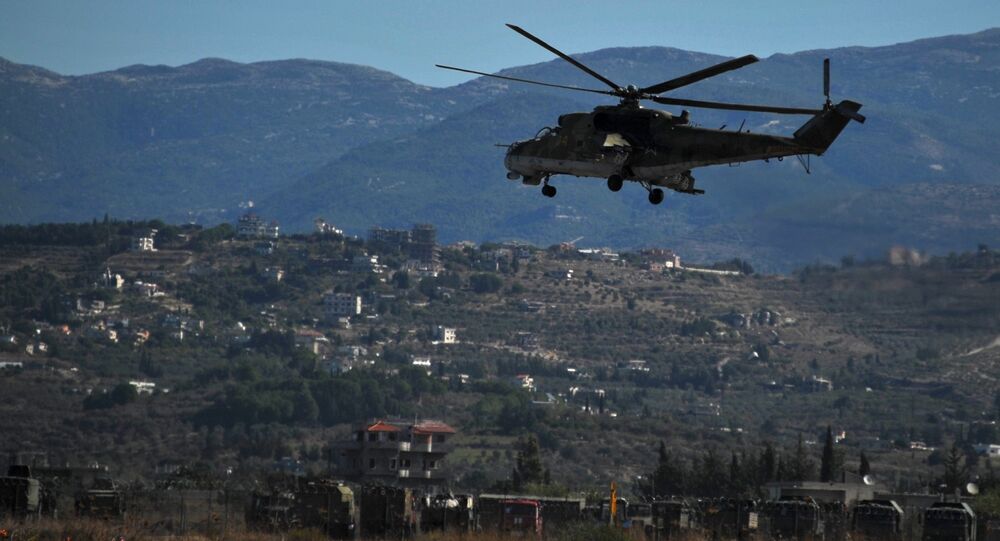 Al-Masdar News earlier reported that Ahrar ash-Sham terrorists had carried out a suicide attack against Russian servicemen near Hmeymim Air Base.

HMEYMIM, Syria, (Sputnik) — "There were no attacks on Russian servicemen or transport convoys in the Syrian province of Latakia and the Russian air base in Hmeymim operates in regular mode," an air base spokesman said Saturday.

According to Al-Masdar News, a member of the Al-Qaeda affiliated terrorist group Ahrar ash-Sham drove a vehicle filled with explosives into a Russian military convoy, which caused a blast. The news outlet cited photos from the terrorists allegedly showing Russian armored carriers.

However, Syrian security forces refuted the claims, stressing that the photos presented were fabrications, torn from the context.

Syria has been mired in a civil war since 2011, with the country's government fighting against terrorist groups and armed opposition forces. Russia provides aerial support to the Syrian government forces and operates Hmeymim Air Base in the south-east of the city of Latakia.

Since the beginning of the Russian campaign in Syria, several cases of casualties among Russian military have been reported. During the operation to free the city of Deir ez-Zor from Daesh militants in the beginning of September, two Russian contract servicemen were killed. On September 24 Russia's Lt. Gen. Valery Asapov died after sustaining a "fatal injury" during a Daesh mortar shelling.

Despite a ceasefire backed by Russia and Turkey currently in place in several Syrian regions, the country still suffers from sporadic shooting.

"Over the last 24 hours, the Russian party of the Russia-Turkey Commission on violations of the Joint Agreement has registered 11 cases of firing in the provinces of Aleppo (5), Homs (3), Latakia (2), and Damascus (1). The Turkish party has registered three cases of ceasefire violations in Damascus (1) and Aleppo (2) provinces," the Russian Defense Ministry’s Center for the Reconciliation of Opposing Sides said in a daily bulletin on Saturday.

According to the bulletin, most of the cases of indiscriminate firing occurred in areas controlled by the militants of Daesh and Jabhat Fatah al Sham (formerly known as Nusra Front) terrorist groups.

© AP Photo / Hassan Ammar
Local Residents Return to Syrian Southern Zabadani City Due to Ceasefire in Area
No humanitarian actions were held within the past 24 hours, and medical aid has been provided to two Syrians, the bulletin added.

"Over the last 24 hours, one ceasefire agreement has been signed with representatives of Tell Ameri in Homs province. The total number of settlements that signed reconciliation agreements has reached 2,266," the ministry said.

The negotiations on joining the ceasefire continue with field commanders of armed opposition groups in the provinces of Aleppo, Damascus, Homs, Hama, and Quneitra. The number of armed formations claiming that they observe the ceasefire regime remained 234.

Russia, alongside Iran and Turkey, is a guarantor of the ceasefire in Syria. Moscow has also been assisting Damascus both by supporting the fight against the terrorist groups and by providing humanitarian aid to the residents of the crisis-torn country.