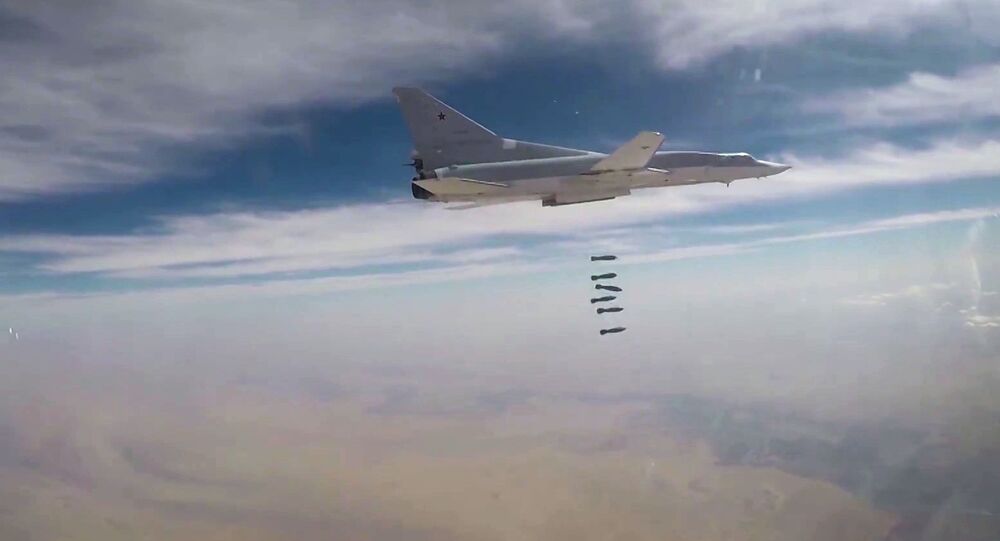 The airstrikes in the area of Abu Kemal (aka Al Bukamal) town have resulted in the destruction of stockpiles of weapons and command posts of the Daesh terrorist group.

Russian Tu-22M3 bombers that took off from Russian territory and reached Syria via Iran and Iraq conducted airstrikes against Daesh targets, focusing mostly on arms, munitions depots and command posts.

The Russian Defense Ministry said in a statement that "provided data confirm destruction of all assigned objects."

The Russian military has been conducting an air operation in the Abu Kemal area over the last several days. On Friday, the Kolpino, a submarine, launched six Kalibr cruise missiles from the Mediterranean Sea.

© Sputnik / Kirill Braga
Need a Light? WATCH Reported Russian Flamethrower Strike on Terrorists in Syria
Russian Defense Ministry's spokesman Maj. Gen. Igor Konashenkov has said that almost two dozen anti-Daesh (anti-ISIS) strikes by the Russian military in the past days have paved the way for the Syrian army to succeed in the area.

So far, more than 90 percent of the territory of Syria has already been liberated from Daesh, according to the Russian military. Russian Defense Minister Sergei Shoigu has also said that Moscow's military campaign in Syria that has been ongoing since 2015 will be finished soon.

The Russian Defense Ministry has opened a department of its reconciliation center in the Syrian city of Deir ez-Zor and the officers are carrying out the monitoring of humanitarian situation on the left bank of Euphrates River, the ministry said in a statement on Saturday.

Meanwhile, Russian military engineers continue the demining of liberated districts of Deir ez-Zor, according to the ministry.

"Over the last 24 hours, engineers have screened 25.5 ha [hectares] of the city and its suburbs, 21 buildings; located and defused 338 explosive devices," the bulletin said.

On Friday, the Syrian Armed Forces’ General Staff said that the army and its allies had liberated the city of Deir ez-Zor from Daesh.