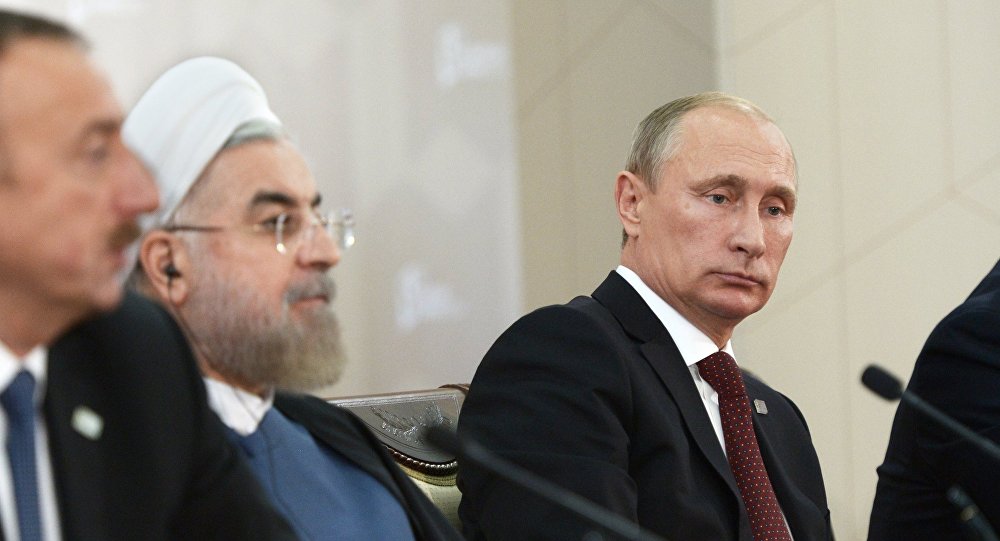 Vladimir Putin, Hassan Rouhani and Ilham Aliyev are speaking before the press after trilateral talks in the Iranian capital on Wednesday.

In his speech the Russian leader pointed out several important aspects of the trilateral cooperation, noting that ensuring regional stability and safety was one of the main priorities.

"We should improve coordination between the intelligence services and law enforcement agencies, ensure intensive exchange of information on the activities of international terrorist and extremist organizations, fight drug trafficking, transnational crime and avert attempts of the movement of militants via our countries," Putin said.

© AFP 2019 / Ryad Kramdi
Iraq Ready to Support OPEC+ Deal Extension - Oil Minister
The Russian president also noted that it was important to continue negotiation on the convention of a legal status of the Caspian Sea, which is bounded by the three countries. He also stressed the importance of mutually beneficial cooperation in trade and economy through facilitating customs procedures and eliminating the obstacles to the free movement of goods and services between the countries. Putin also suggested considering the broader use of national currencies in the transaction between the countries, as well as closer ties between financial and banking companies.

Vladimir Putin also pointed out there were opportunities for cooperation in transport infrastructure, in particular in the initiative of constructing the western line of the International North–South Transport Corridor. He also reminded that Russia, Iran and Azerbaijan held leading position in hydrocarbon production and could efficiently collaborate in energy sector.

"We see the perspectives for enhancing cooperation in energy sector … I believe that joint exploration of oil and gas fields is in our common interests, as well as launching joint projects in production and transportation of resources," Putin said. 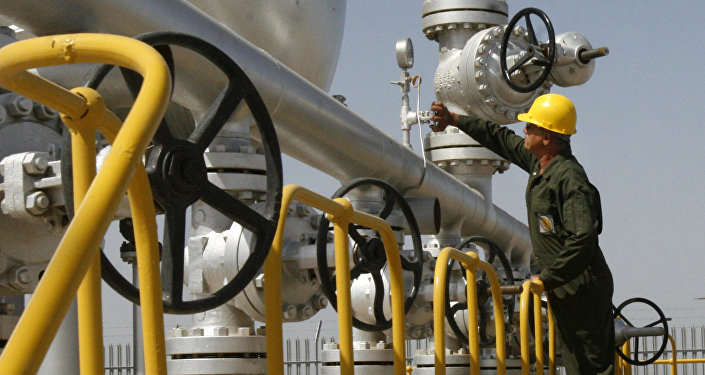 © AP Photo / Vahid Salemi
Iran Ready to Discuss Joint Oil, Gas Projects With US Companies Despite Sanctions
The Russian leader stressed the relevance so-called Russia-Azerbaijan-Iran greater energy bridge project, which stipulated integration of the electricity systems of the three countries, noting that the initiative would contribute to the energy security of the whole region. He also named industry, agriculture, high-tech, medicine, pharmacy as important areas of trilateral cooperation.

Russia, Iran and Azerbaijan want to deepen high-level cooperation on global energy market platforms and expand cooperation in the oil and gas sector, a joint statement signed by the countries' presidents in Tehran on Wednesday said.

"The parties point out the key role of the Russian Federation, the Republic of Azerbaijan and the Islamic Republic of Iran in the sustained functioning of regional and global energy markets, support the expansion of cooperation in the oil and gas as well as petrochemical sectors, including in the area of exploration and development of oil and gas fields, transport and swap deliveries of crude oil and petroleum products, as well as deepening cooperation on the international platforms," the statement said.

The parties also supported the projects on connecting the electric grids of the three states as well as agreements on electric power trade.

"We discussed different issues in the sector of stability, fighting crime and terrorism. But the issues of economic nature are at the forefront, of course," Putin said.

The Russian president added that he also discussed Syria with Rouhani and Aliyev, and the countries were successful in coordinating their positions.

"We have evaluated the security situation in the region in details, discussed the issues related to the Iranian nuclear deal and, of course, focused on the situation in Syria. I would like to stress that we are working with Iran in a very productive way. We are able to agree our positions on the Syrian issues," the Russian leader said.

Russian President Vladimir Putin highlighted the importance of high-level meetings identical to Russia-Iran-Azerbaijan trilateral summit and invited the Iranian and Azerbaijani leaders to Russia for the next meeting.

"The meetings in such format are at demand. They enable us to coordinate positions on the most sensitive issues of the regional and global agenda, to engage in a constructive search for solutions to common issues in the area of security, fights against global terrorism, to enhance cooperation in trade, economic, cultural and humanitarian areas … I would like to invite you to Russia for the next trilateral summit," Putin said at the summit with his Iranian and Azerbaijani counterparts in Tehran.