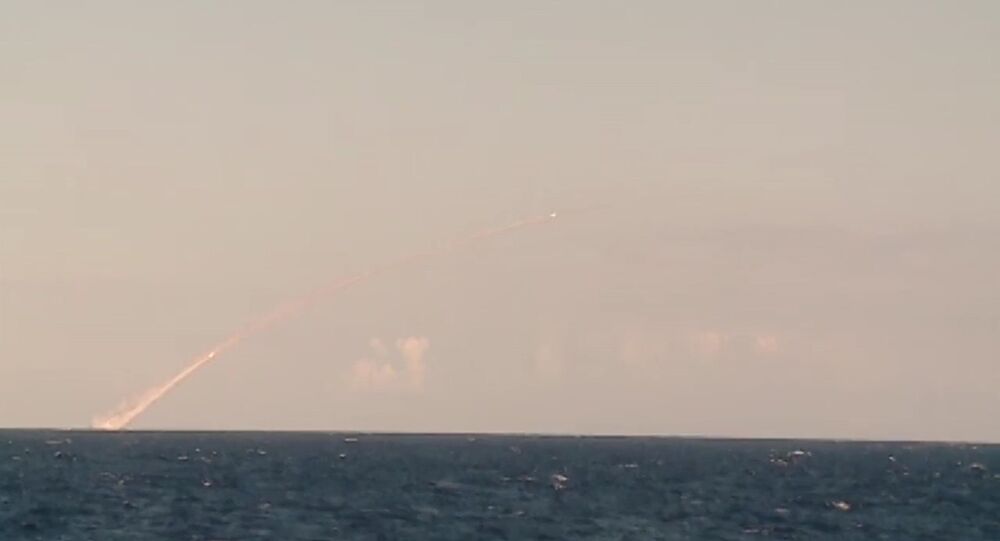 The Russian Defense Ministry has announced a massive strike on Daesh targets in Deir ez-Zor amid the Syrian army's operation to wipe terrorists out from the province.

"On October 31, 2017, the submarine 'Veliky Novgorod,' from a submerged position, launched massive strike with Kalibr cruise missiles on important ISIL [Islamic State, ISIS, Daesh, banned in Russia] targets in Deir ez Zor province from the eastern part of the Mediterranean Sea," according to the Russian Defense Ministry's statement released on Tuesday.

As a result of the strike with three cruise missiles, terrorists' command posts, a fortified area where militants and armored vehicles were present, as well as a large arsenal of weapons and ammunition of Daesh terrorists near the Abu Kemal settlement in the Deir ez-Zor province have been destroyed as confirmed by means of reconnaissance.

The strike comes amid the Syrian army's operation assisted by the Russian aviation aimed at eliminating rest of terrorists in the Deir ez-Zor province after the historic lifting of the three-year Daesh siege of the city of Deir ez-Zor in September.

© Photo : Mikhail Alaeddin
Liberation Marches On: Video Shows Challenging Military Operations by Syrian Army in Deir ez-Zor
In the course of the military campaign in the province, the government forces managed to establish control over the largest Daesh hotbed in the province located in the city of al-Mayadeen.

As of mid-October, the Syrian government offensive near Deir ez-Zor has been developing successfully. According to the Russian General Staff, the assault units of Gen. Hasan Sukhel with the support of Russian air forces completely liberated the right bank of the Euphrates to the north-west and west of the city, establishing control over an area of 1,776 square miles.

Russian Operation in Syria Close to its End

Earlier, Defense Minister Sergei Shoigu announced that Russia's military operation launched in September 2015 at the request of the Syrian leadership is close to its end.

According to Russian President Vladimir Putin, over 90 percent of the Syrian territory has been freed from terrorists.

In the course of Russia's campaign to assist Damascus in its fight against terrorism in order to settle the crisis by conducting a national reconciliation dialogue, the government forces liberated — among other areas in the country — the second largest Syrian city of Aleppo, the ancient city of Palmyra and most recently Deir ez-Zor city from terrorists.

Apart from military assistance, Russia is also one of the guarantors, alongside Turkey, of the Syrian ceasefire — in effect since late 2016. Moscow, Ankara and Tehran have also brokered the peace talks between the Syrian government and armed opposition that are held in Astana and have already resulted in signing several agreements on the creation of de-escalation zones in the country rocked by a war since 2011.

Decisive Battle for Syria: The Liberation of Deir ez-Zor