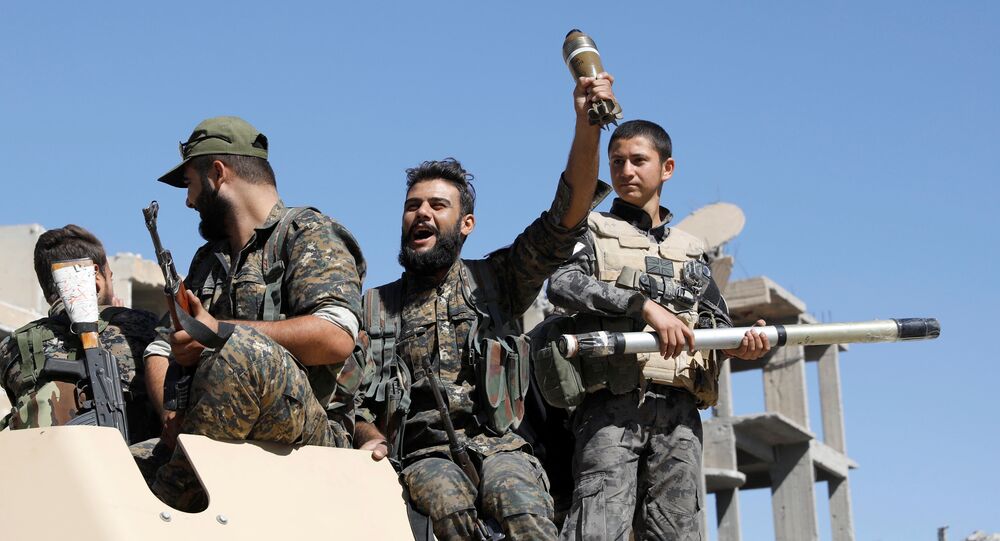 In the follow-up to the recently-announced liberation of the Syrian city of Raqqa from Daesh by the predominantly Kurdish Syrian Democratic Forces (SDF), Salih Muslim, former co-chairman of the Kurdish Democratic Union Party (PYD), talked with Sputnik Kurdistan about the future political order in Syria and their relationship with the US.

After the recently-announced success of the US-backed SDF in Raqqa and subsequent setup of control over the al-Omar oil field (Syria's largest), many analysts suggested that the US will try to form a Kurdish region in Syria.

Commenting on the above suggestions, Salih Muslim noted to Sputnik Kurdistan that when the US entered the territories of Rojava, the territory that is home to the Syrian Kurds, it claimed that it had done it solely for the sake of fighting Daesh.

"We have been cooperating with the US in this fight and assisting each other. The US, however, is a large power with its own interests. Our relationship with Washington is limited only to the anti-terror operations. We have no other joint activities on the ground," the former politician stressed.

According to Salih Muslim, the political contacts between the Syrian Kurds and the US have been formed purely during the peace negotiation process in Geneva. US officials have visited Rojava to hold talks and have meetings. However their relationship is far from the level they aim to achieve.

The Kurdish official also touched upon the issue of the military bases which the US setup in the area under the control of the Syrian Kurdish People's Protection Units (YPG) in violation of the country's sovereignty, noting that Washington unveiled its military facilities because it does trust the Syrian Kurds.

"We don't know how long the US is planning to stay in Rojava, as there has been no agreement between us on the issue," he explained.

Salih Muslim further suggested that even if Daesh are defeated, it would be very hard to eliminate terrorism as such as other terrorist cells could pop up and terrorism will continue existing by changing the forms and names of organizations.

© AFP 2021 / DELIL SOULEIMAN
Syrian Kurds 'Don't Want Partition of Syria, Do Not Seek Kurdistan's Autonomy'
With regards to the establishment of Kurdish control over the country's al-Omar oil deposit, the politician denied that the Kurds have been selling this oil either to Damascus or the US.

"Until now, nobody has been buying oil from us. We would have been happy if anyone did, as it would ease the lives of our people and overall situation. However we haven't made any such agreements," he said.

The Kurdish politician also ruled out the idea of creating an independent Kurdistan on Syrian territory, noting that the majority of the population in Raqqa and Deir ez-Zor are Arabs. Those Syrian social groups who call for such autonomy should be convinced of the idea of a multinational state. He noted that over 50 percent of Rojava's population support such an idea and in the event of a referendum, the majority would opt for a multinational system.

Salih Muslim stressed that after the final defeat of Daesh, it will be the people who will make a decision on the further system of governance in Raqqa. Even if they opt for democratic autonomy, the Kurds will treat such a decision with respect.

© AP Photo / Hassan Ammar
Syrian Kurds Say Federalization of Country Will Resolve National Problems
Commenting on the military operation in Raqqa, he said that the SDF found 12 ammunition depots left over from Daesh, There should be an investigation into who supplied these arms to terrorists, he said, noting that the militants would have been unable to obtain them without support from abroad.

Asking himself who had created Daesh in the first place, Salih Muslim declined to comment on its possible support and financing by the US, however suggesting that it might be revealed in the future who was behind this terrorist group.