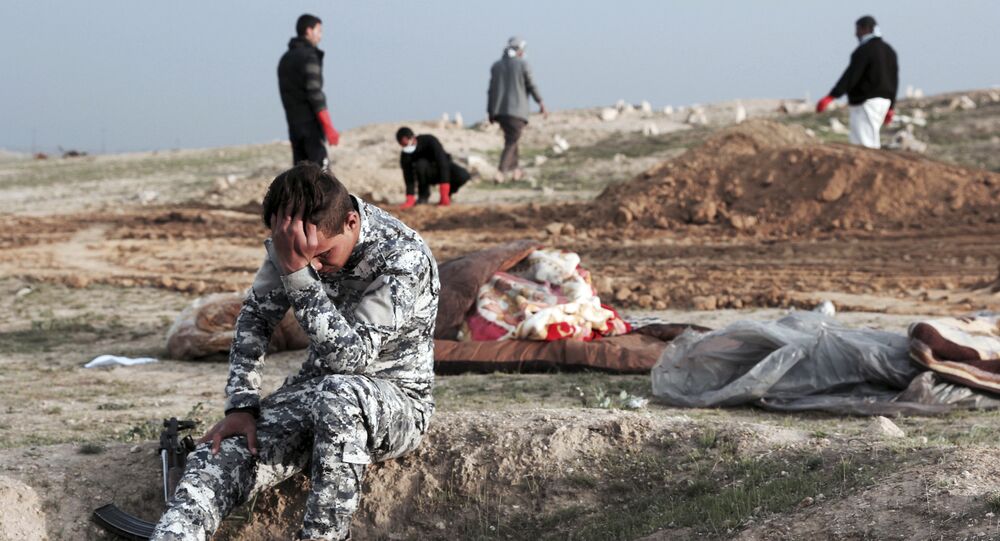 The Iraqi armed forces are conducting a large-scale operation against the Daesh terrorist group in the area of Al-Huwaji in the country aimed at squeezing terrorists from the part of the country that they had controlled for several years.

BAGHDAD (Sputnik) – According to the command of the army, Iraqi troops have found a mass grave "with bodies of dead soldiers, policemen; approximately 50 people executed by the Daesh in the district of Hawija."

According to the head of the police of the province of Kirkuk, the specialists intend to thoroughly study the remains, as "hundreds of other Iraqi soldiers and policemen who fought against extremists are considered missing."

READ MORE: Up to 100,000 Kurds Could Have Left Kirkuk Before Iraqi Army Took City

According to reports, more than 100 civilians disappeared in Syrian Saadia earlier, and “the victims in the grave were executed by Daesh during its control of Saadiya after June 2014," Diyala Organization for Human Rights leader said.

Earlier, near the village of Abu-Sahra, located in the south-east of El-Huweiji, two similar graves have already been found with the remains of Iraqi soldiers.

Prior to the operation, the settlement and the surrounding territories were held by up to 2 thousand extremists. On October 11, it was announced that Iraqi army has completely liberated Hawija from Daesh terrorists.

Northern and western parts of Iraq have suffered violence since Daesh began its attack on the country in 2014. The militants were kidnapping, executing and enslaving thousands of civilians, focusing on ethnic and religious minorities like Yazidis. The UN called on the international community to recognize the crimes of Daesh against the Yezidis as genocide.

Baghdad's Advance on Kirkuk Has 'Broken the Kurds' Back'