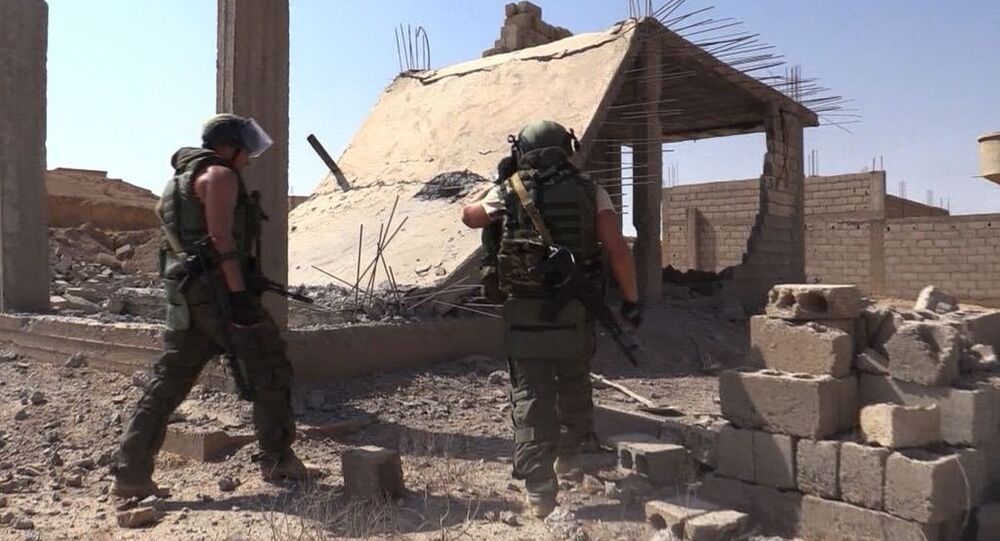 The Operation Inherent Resolve spokesman Colonel Ryan Dillon told Sputnik on Friday that US and Russian generals recently have held a third face-to-face deconfliction meeting in an attempt to prevent any mishaps as rival forces close in on the same territory in Syria.

WASHINGTON (Sputnik) — "I’m pretty sure that there have been three now in total. I think three face-to-face meetings have occurred," Dillon said in a phone interview from Baghdad, adding that the latest meeting had occurred "within the last week and a half."

All three meetings took place outside of Iraq and Syria in a Middle Eastern country, Dillon told Sputnik.

US and Russian generals held the first such meeting in mid-September, followed by a second in early October, Dillon previously disclosed.

Such meetings give US and Russian officers an opportunity to examine the same maps and graphics and arrive at agreements to avoid any ambiguity, he said.

© Sputnik / Mikhail Alaeddin
Daesh Controls Only 5% of Country as Result of Russian Op in Syria - MoD
The meetings allow "operational leaders on both sides to work through these deconfliction measures so that we can both continue to go after our goals and objectives, and ours is defeating ISIS," Dillon said, referring to the Daesh terror group.

In recent weeks, US and Russian forces have stepped up their communications as the battlefield of operations against the Daesh shrinks, he noted.

"As the pro-regime forces and our partner force the Syrian Democratic Forces started to move closer to one another, there’s no question that the level of deconfliction had to increase," Dillon said, adding that the lines of communication between the two sides "are often used multiple times throughout the day."

The two sides maintain two lines of communication to coordinate operations in the air and on the ground, as well as a third direct channel for senior level commanders, Dillon said.

US-Led Coalition Not Coordinating with Russia on Syria's Idlib

Meantime, The Spokesperson for the Operation Inherent Resolve Colonel Ryan Dillon told Sputnik that The US-led coalition was neither coordinating with Russian forces nor operating in the Syrian province of Idlib.

"We are not. So the organization that I represent is strictly focused on the defeat and fighting ISIS [Daesh] so all of the things that are happening in Idlib with al-Nusra and HTS that is not the coalition who is in that area," Dillon said in a phone interview from Baghdad, referring to the terrorists groups of Nusra Front and Hayat Tahrir al-Sham.

Dillon added the coalition was monitoring developments in Idlib province, as fighting there could spill into areas where the Daesh terror group has been defeated.

"Our partners the Syrian Democratic Forces and the civilian councils that have been established are not negatively impacted, but that is not something that the coalition is not actively involved in, the whole situation in Idlib," he said.

The Syrian province of Idlib is mainly controlled by the Free Syrian Army and other opposition forces, who are fighting against government troops.

Idlib is covered by one of four de-escalation zones created after an agreement reached by participants of the Astana talks on Syrian reconciliation mediated by Moscow, Ankara and Tehran.