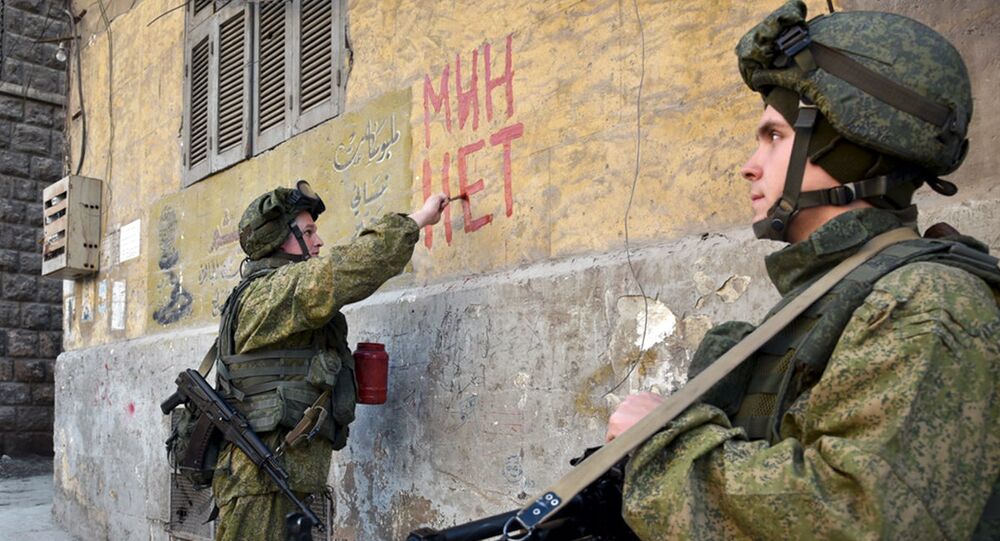 The Russian Defense Ministry has reported about the substantial advances made in fighting against terrorism in Syria. The Russian sappers have deactivated nearly 1,000 of various explosive devices, while hundreds of militants positions had been defeated by the Aerospace Forces.

HMEIMIM (Sputnik) — Russian sappers have cleared 33 hectares of the territory in and around the Syrian city of Deir ez-Zor in the past 24 hours, destroying more than 960 explosives, Russian Defense Ministry's Center for Syrian reconciliation reported on Thursday.

"In the past 24 hours, 33 hectares of the territory of the city and its suburbs, six kilometers of roads, and 35 buildings were demined, 963 explosives were discovered and destroyed," the center said in a statement.

© Sputnik / Dmitriy Vinogradov
Russia Delivers Two Tons of Humanitarian Aid to Syria - Military
According to the document, a total of 741 hectares of territory, 183 kilometers of roads, and 1,522 buildings have been inspected since the start of the Russian demining operation in Deir ez-Zor, 37,517 explosive items have been found and destroyed.

The Russian Aerospace Forces have destroyed over 650 targets of various terrorist groups in Syria in the past week, according to an infographics report by the Russian Defense Ministry.

The report, posted on the website of the Krasnaya Zvezda (Red Star) newspaper, the official publication of the Defense Ministry, says the Russian combat planes operating in Syria have carried out more than 360 sorties during this period.

By mid-October, the Russian campaign in Syria had resulted in more than 92 percent of the country's territory being liberated from terrorists.