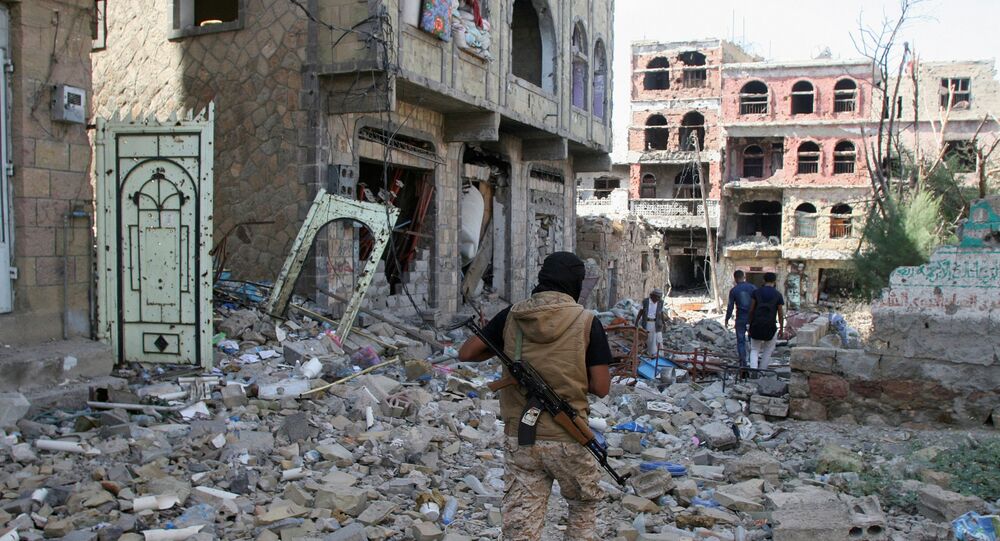 A bipartisan group of US lawmakers attempting to end the US support for the widely condemned Saudi Arabian intervention in Yemen are now trying to fast-track a bill to that effect to a vote. The intervention, which has led to tens of thousands of civilian casualties, is presently directly supported by US fueling tankers and targeting intelligence.

Resolution 81, co-sponsored by two Republican and two Democratic lawmakers, is simple, according to co-sponsor Rep. Ro Khanna (D-CA). "All the bill basically does is say we should not be assisting Saudi Arabia in Yemen," he told Military.com earlier in October. The bill would not affect anti-terror operations in Yemen, according to Khanna.

Now, Khanna says that he and his co-sponsors are in negotiations with Congressional leaders to fast-track the vote on the resolution under the War Powers Act. "The statute does not just apply to ground troops overseas," Khanna said, "it says any US government coordination or participation with a foreign government in an overseas conflict triggers the need to go to Congress."

The civil war in Yemen has raged since 2015, with the Saudi-backed government of Abrabbuh Mansur Hadi battling for control of the country with the primarily Houthi rebel groups who support former president Ali Abdullah Saleh. Al-Qaeda in the Arabian Peninsula (AQAP), an Islamic militant group, has emerged as the third player in the conflict.

The US has supported the Saudi intervention, which has been condemned by the United Nations, the European Commission and many human rights groups. The issue is one of the rare ones to unit progressive Democrats and conservative Republicans, as both oppose an interventionist US foreign policy. Khanna said he expected significant support from both his own party and the House Freedom Caucus, the farthest-right grouping in the US House of Representatives.

"I don't want to be complicit with Saudi [Arabia], which lacks regard for human life. When America has the highest standard for these things, we should never be cooperating with Saudi Arabia," Khanna said. "It compromises America's moral standards, and we're being blamed for their atrocious actions."

The other cosponsors of the bill are Reps Mark Pocan, D-WI.; Thomas Massie, R-KY., and Walter Jones, R-NC. Jones, a small-government and non-interventionist Republican who in April said that the Trump administration's support for the Saudi intervention made the US a "de facto ally" of AQAP, further criticized US support of Riyadh to Defense News.

"They killed 3,000 Americans," said Jones, referring to the September 11, 2001, terror attacks. Fifteen of the 19 hijackers were Saudi Arabian nationals. "Why in the world are we always cutting deals with people who don't seem to care about Americans? For me, personally, I see the Saudis in the same boat with the Iranians."

The lawmakers admit that it may be difficult to pass the resolution due to the many powerful lobbying firms that represent Saudi interests in DC, such as the Podesta Group, BGR Government Affairs, DLA Piper and Pillsbury Winthrop.

Establishment representatives on both sides are also expected to oppose an end to US support. "I see problems with what the Saudis are doing, but I see huge problems with the Houthi as well," said Rep. Brad Sherman (D-CA) in a statement to the press. "I'm not ready to say it's wrong to help Saudi Arabia, as long as the country makes that decision in a constitutional manner."

The conflict in Yemen, along with the recent deaths of US soldiers in Niger, has raised questions about whether the executive branch is complying with the War Powers Act. Passed in 1973, the law is meant to limit the president's ability to commit the nation to an armed conflict by requiring him to acquire Congressional authorization in most cases. Congress never voted on US support for the intervention, instead quietly acquiescing when then-president Barack Obama decided to aid the Saudis in 2015.

In 2001, Congress passed the Authorization for Use of Military Force (AUMF), which has been broadly interpreted to allow the US military to undertake operations against Islamic militant groups. Sixteen years later, after the ambush in Niger, some in Congress are calling for a revision of AUMF. Defense Secretary Jim Mattis and Secretary of State Rex Tillerson will testify on Monday on the prospect of revision.