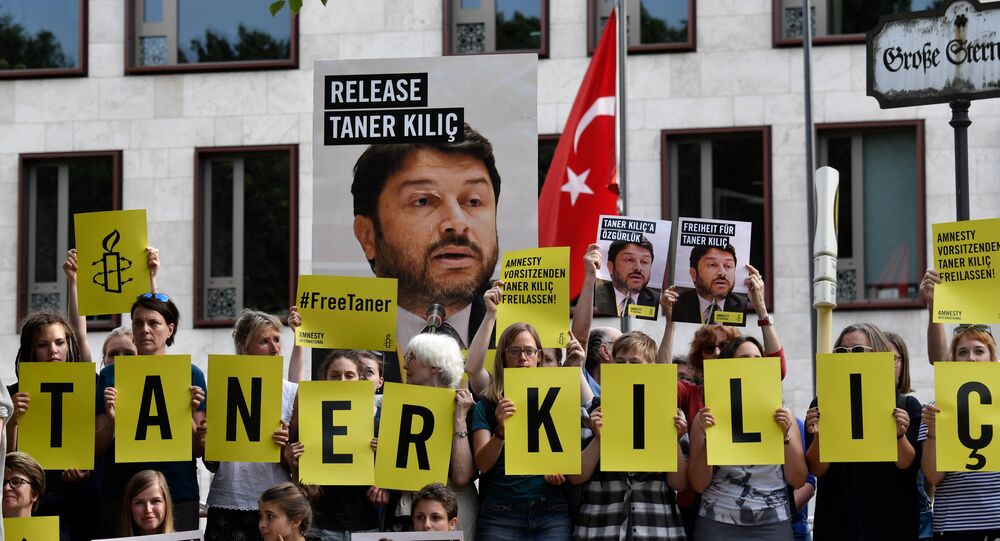 The head of Amnesty International in Turkey is due to go on trial on Thursday accused of downloading an app. UK Foreign Secretary Boris Johnson has expressed his concern about the charges, which are supposedly linked to last year's attempted coup.

The Chair of Amnesty Turkey, Taner Kilic, will go on trial on Thursday, October 26, in the city of Izmir.

His crime was to download a widely available smartphone app called ByLock, which the authorities claim was used by the plotters behind last year's attempted coup.

On Wednesday, October 25, Idil Eser, a director of Amnesty in Turkey, will go on trial along with nine others in a separate trial in Istanbul.

Both Kilic and Eser are accused of suspicion of involvement with the Fethullah Gulen Terrorist Organization (FETO), which the Turkish government claim was behind the 2016 July coup.

The charges against all 11 defendants carry maximum jail terms of 15 years and the verdicts will be handed down by a judge, rather than a jury.

Amnesty says the charges are "trumped-up" and do not stand up to scrutiny.

"From the moment of their detentions, it has been clear that these are politically-motivated prosecutions aimed at silencing critical voices within Turkey," said John Dalhuisen, Amnesty's Director for Europe and Central Asia.

Stand up for the #Istanbul10 and Taner before their trial starts tomorrow. #Turkey must #FreeRightsDefenders —> https://t.co/pFhZp0gpyv pic.twitter.com/2uCAGLoJkC

The indictment against Eser does not make sense, according to Amnesty, because the charges relate to two documents which were drawn up even before she joined Amnesty, and claim she is a member of three terrorist organizations, which are directly opposed to each other, the group said.

"Without substance or foundation, the Turkish authorities have tried and failed to build a case against İdil, Taner and the other nine human rights activists. It took the prosecutor more than three months to come up with nothing. It should not take the judge more than half an hour to dismiss the case against them," Mr. Dalhuisen added.

The only evidence against Kilic, they said, was that he had downloaded ByLock, an app which had been downloaded 600,000 times by people all over the world between 2012 and 2016.

In September, the Turkish supreme court ruled ByLock was an app which had been redesigned exclusively for Gulenist plotters and using it automatically made someone guilty of membership of a terrorist organization.

Turkish intelligence say they have identified the IP addresses of nearly 100,000 Turks who had used ByLock.

Colleagues from the @NASUWT joined us at the Turkish Embassy this morning to call for the release of the #Istanbul10 @amnesty @AmnestyUK pic.twitter.com/UowNIxiurp

As Sputnik reported in October, internet service providers often put thousands of individuals on shared IP addresses, and Amnesty say this is not sufficient evidence to prove membership of a terrorist organization.

Among the others on trial are Veli Acu and Günal Kurşun, from Turkey's Human Rights Agenda Association, Ozlem Dalkıran and Nalan Erkem from Citizens' Assembly, Ilknur Ustun, from the Women's Coalition and Peter Steudtner, a non-violence and well-being trainer.

British Foreign Secretary Boris Johnson said he had raised the issue with his opposite number, Mevlut Cavusoglu.